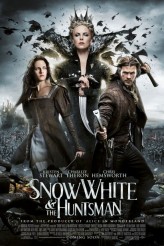 Another rethinking of the Grimm fairy tale is a visual treat, but the story is so predictable there are few surprises it ultimately offers

However, SNOW WHITE AND THE HUNTSMAN has just the right amount of reinvention and visual panache, that it turns out to be a pretty decent movie. The story is way too familiar, which is one of its big drawbacks, but director Rupert Sanders and writers Evan Daugherty, John Lee Hancock and Hossein Amini add enough new twists and turns that it makes this one of the summer’s biggest surprises.

Charlize Theron plays Evil Queen Ravenna who feeds off of youth to stay young herself. She prides herself on being the fairest in the land, but the costs are great. Her latest conquest is a king with a beautiful young daughter named Snow White. She kills the King, takes the throne and sends the kingdom into darkness while Snow White is locked away throughout her entire childhood – with everyone thinking she’s dead.

She grows into Kristen Stewart who uses an opportunity to make a great escape into the dark woods and ultimately finding companionship with The Huntsman (Chris Hemsworth) who is hired to locate her and later seven dwarves who say they’ll fight alongside her.

There’s a pseudo love triangle with The Huntsman and Snow White’s childhood sweetheart William (Sam Claflin) and the Huntsman, but not much is done with it (thankfully there isn’t a TWILIGHT-esque Team Jacob and Team Edward to fuel this film).

It’s the production design and original visual effects that keep SNOW WHITE AND THE HUNTSMAN very interesting and entertaining. The trickery employed to make the dwarves look real (especially when full-sized actors like Ian McShane and Bob Hoskins are playing they are seamless.

The acting is also quite good with Theron doing a bang-up job (and coming off quite scary) while Stewart actually proves to not be so irritating after her stint on the TWILIGHT films. She handles her English accent quite well.

SNOW WHITE AND THE HUNTSMAN is a fun, intriguing, even when it is predictable. It’s the execution that makes it watchable. The fact that there are enough detours to keep it fresh is surprisingly, but a welcome one. The movie didn’t have to be as inventive as it was – especially following on the heels of MIRROR,  MIRROR but it works – which is more than you can say from most of the other summer movies.