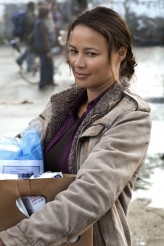 The second part of the two-part FALLING SKIES series premiere kicks into gear with “The Armory”, a solid episode that I would say is even better than the first hour.

With a lot of the exposition out of the way, the show now gets into a groove showing the pitfalls and dangers about living with an alien overlord over your shoulder. This is augmented by humankind’s split from those that are fighting for our survival, and those who are exploiting our survival for sport.

When Tom (Kyle Wyle) arrives with the Second Massachusetts at the latest checkpoint, he’s assigned to scope out an Armory that might have more weapons to aid them in their fight against the aliens. What they discover is John Pope (Colin Cunningham) and his band of scavenger/alien hunters. They’re not giving up their weapons – they want everything the Second Massachusetts have in exchange for Tom and his platoon’s lives.

This leads to an interesting conversation on the difference between the will to live and the will to self-destruct. It also gives Wyle and Cunningham some great screen time to debate their different philosophies. It also promises they’re either going to be great friends before the season is over and even greater enemies.

There are a handful of twists and turns along the way (a major one toward the end I didn’t see coming) and the script is even tighter than “Live and Learn.” We’re slowly starting to see all the pieces of the series coming together and how the the military and civilians could be headed for their own internal civil war as well.

Wyle is again superb as Tom, and we’re starting to see his relationship grow with his eldest son Hal (Drew Roy) as well.

However, the one thing that hopefully FALLING SKIES won’t do is try to survive on weekly episodes of “Tom needs to go get food or Tom needs to go save an innocent kid or Tom needs to go get the girl tied to the railroad tracks.” The show will be over so fast, TNT won’t know what hit them. Instead, variety is going to be essential, and the show is going to have to find a way to not bore its audience like V, THE EVENT or even THE WALKING DEAD did during a couple of episodes in its abbreviated season. FALLING SKIES needs to engage us week in and week out with compelling stories, otherwise, what’s the point?

It already has a great cast of characters that should make the storytelling much more fluid than V, but now it’s all about what they do with it as to whether or not audiences will stick around for another resistance fighting those big bad aliens. For me, it’s got me interested for the time being – but try me in three weeks to see if my opinion has changed.