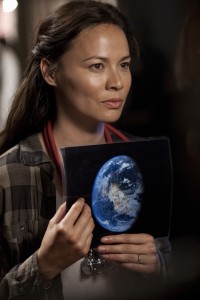 Okay, so three episodes is the limit for me on how a new series can take a limited story structure and milk it until it’s unbearable.

With “Grace” we’re stuck with another episode where Tom Mason (Noah Wyle) has to go on some sort of mission, avoid Skitters (the aliens), deal with an unknown “X” factor, talk to his military advisors, tell his youngest son everything is going to be okay and then return with a few scrapes and bruises.

Unfortunately, this formula has been used every episode now with little variation, and while it was tolerable at first, now it’s just plain irritating. It’s sucking the tension and the momentum the series had developed right out the window.

And the B-story is just as annoying, as Doctor Anne Glass (Moon Bloodgood) tries to communicate with the Skitter Tom bagged during the last episode. However, Dr. Harris (Steven Weber) believes in taunting their alien prisoner. Now it’s a pissing match between these two doctors – with Harris just begging to be alien food.

None of this dilemma matters though as we discover the Skitters use radio-like waves in their heads to control the kids who have been turned into mindless worker bees by them.

There are so many things that bothered me in this episode, I don’t know where to begin.

I guess bad decision number 1 comes when ex-con John Pope (Colin Cunningham) is allowed to tag along with Tom and his platoon as they go searching for motorcycle. Sure, have the military keeping an eye on him while he’s cooking food for everyone, but send him out on a mission, and I figure going to be just fine and not cause any trouble (as long as you don’t give him a gun).

Ugh. You know where that’s going to lead.

Then, back at base camp, the doctors leave the alien back-sucking device (called Harnesses) next to the kid they just removed it from – and leave him alone in the room with one of the aliens. And then what does the kid do – he puts the Harness right back on him because the alien psychically told him to.

However, none of this compares to the repetitive nature of Tom’s missions and family dilemmas. It seems like the same conversations he has with his younger son and older son every week so far and it’s the same small fight with the big bad aliens – without any variation in between.

It’s a shame that “Grace” isn’t better than it should be. It also fulfills my  greatest fear that this series was going to rely on this very narrow formula as it builds to something more significant towards the latter part of the season.

The only two decent things that come out of this episode is giving Dr. Glass a little more of a backbone – and some smarts. Bloodgood is great and she’s finally given a little more meat to her character.

I also liked seeing Matt (Maxim Knight) get to do something for a change as he helps keep tabs on the makeshift ham radio. In many series, supporting roles are usually the ones with the least amount of character development, but here, the supporting roles are proving to be just as interesting and dynamic as the leads.

The idea that the Skitters sleep like bats is also a pretty creepy idea – and the VFX are pretty cool on this one.

Hopefully “Grace” is just a small hiccup during FALLING SKIES short ten-episode season. Clearly we needed some breathing room to discover a little more about the aliens and what they want and even though we don’t get many answers, we do get a better understanding that the aliens are just like humans – they get tired, they get scared, they get angry and they get caught up into lazy storytelling just like everyone else.

Click on link: For AX’s Exclusive Interview with FALLING SKIES star Will Patton