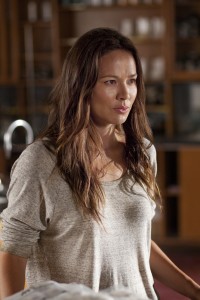 The big question I found myself thinking while watching the third episode of FALLING SKIES – “Prisoner of War” is “why I’m increasingly getting sucked into the storytelling even though there’s a been there/done that feeling to this alien invasion series?”

With V, it was all about a bunch of set-up and anticipation and little pay-off. With the movie BATTLE: LOS ANGELES, it was about huge action, explosions and the occasional cheesy line, but no middle ground. With THE EVENT it was a bunch of random things and little pay-off and terrible B-plot detours.

Somewhere in the middle resides FALLING SKIES which seems to gain its strength from keeping the story focused on everyman history teacher turned military warrior Tom Mason (Noah Wyle). Military was his life only in the books, not by trade and now he has to find his way through moral ambiguities that come with each mission he’s sent out on as an actual soldier.

“Prisoner of War” focuses on the extraction of his middle son Ben (Connor Jessup) who has been turned into one of many mindless teenage worker bee used by the aliens to collect scrap metal and electrical wiring for them. When Tom’s team goes in, things go haywire when one of his men sees his son among the kids – causing chaos and jeopardizing the mission.

Tom tries to go back and get his son, but instead ends up battling a Skitter alien and winning (even bringing it back alive for research). Meanwhile, a new doctor (Steven Weber) puts the kid that’s been brought back through an experimental procedure. The procedure can remove the ganglia attached to the back of his neck, though bones still remain inside their body.

All seems good, until we realize that the kid is still connected psychically to the Skitter. 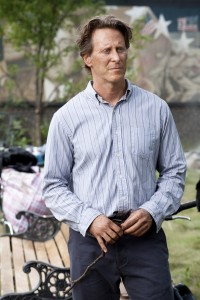 Meanwhile, Tom’s other son Hal (Drew Roy) is left behind with the Skitters during the botched extraction. His girlfriend is taken prisoner, while Hal sees innocent worker bee children slaughtered as a message to not take what is now theirs.

Some of the most interesting things in the episode hardly involve the aliens. When Tom finds out the truth about what happened to his wife in the alien attack, it provides some pretty heavy moments for Wyle and Weber to play off each other.

We also see prisoner-of-war John Pope (Colin Cunningham quasi-channeling LOST’s Josh Holloway) prove his skills as a cook (it’s better than bathroom duty). Pope is one of the most interesting characters in the entire show – the wild card who mixes things up among the humans and brings some necessary levity to the otherwise heavy series.

There are also some nice moments between Wyle and Moon Bloodgood who plays the Second Massachusetts’ resident doctor. There’s an obvious unstated attraction between the two, but it is thankfully something that doesn’t look like it will be explored any time soon in any serious way.

Kudos to the FX team for providing some pretty stellar VFX of the Skitters and the Mech robots. For a TV show, it’s done incredible well – and smartly too. Aside from a couple of close-up shots of the Skitter POW, the wide shots treat the aliens as characters, rather than effects which is why they feel more organic to the scenes, instead of huge spectacles.

FALLING SKIES has done a fine job with its first three episodes. It’s finding some honest emotion and story clarity, without getting bogged down into complicated mythology and over-thought out plot constructs. It keeps things small, as we build to bigger things. That’s the way things should be – get your audience sucked in, teach them about the world and what it means – then get grandiose and noisy as the 10-episode season builds toward some major event.

I didn’t think the series could suck me in, but I’m a follower now and maybe cable genre series like FALLING SKIES and THE WALKING DEAD will hopefully (and finally) teach the networks how to do this kind of genre storytelling well – and still keep the audience engaged (and willing to return) week after week.