A funky, stylish car with good looks and excellent performance 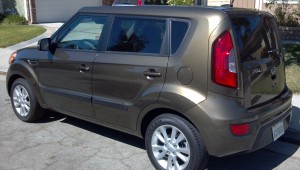 The chance to drive two different Kia’s in one month was definitely a fun treat. Not only was it a contrast to see how the car company handled two entirely different types of vehicles – but also it was great to see how each performed when put to the test.

I have to say, I loved the SOUL just a little bit more than the KIA RIO. The reason is that the SOUL feels like a hipper version of a SUV. It looks cool and funky, it’s incredibly comfortable and like all of Kia’s cars it provides one smooth ride.

It also has made its mark as a quasi-party ride since those dancing hamsters have really upped the profile of the car with their inventive commercials. 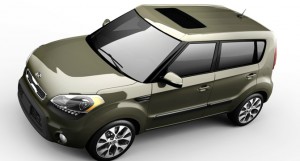 The look of the SOUL is actually quite European. It has a box-like exterior, but again, it’s designed in such a way that makes it feel hip and cool without feeling gaudy.

It also looks and feels like a much bigger car than it actually is – which is a good thing. 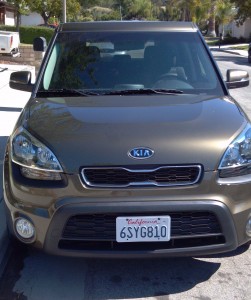 The lights also have a function that if you choose, where it recognizes when it’s dark enough for the front headlights to go on automatically. A nice little bonus for those of us who like to turn on our headlights at night way too early, just to be safe. Now the car does it for you … if you choose.

There’s also privacy glass, which makes it hard for others to peer into your vehicle when parked.

This vehicle has tons of room both in the front and the back. It feels very comfortable and the SOUL was put to a test for a day-long drive to San Diego. Traffic was a mess – four and a half hours for what’s normally a two hour and chance trip from Los Angeles. Yet, the comfortable seats and ample leg room made the drive far more pleasant – especially sitting in bumper to bumper traffic.

The SOUL, like many KIA’s has a decked out steering wheel with controls for the car stereo, cruise control and Bluetooth phone. 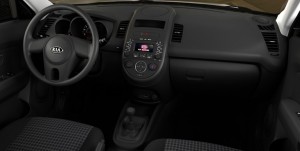 In terms of extra space, the front dash has an opening where you can put your belongings – and you actually close it shut. This is perfect, so if you have to run in somewhere, someone won’t know your wallet or phone is sitting there just tempting someone to break in and steal it. 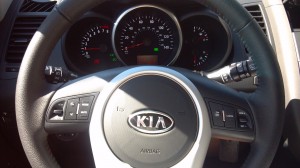 There is an auxiliary USB plug, like the RIO, and the interesting part of this stereo system is the ability to identify songs from CDs that you’ve burned from iTunes as well as regular CDs. It’s very intuitive and one of the perks of this upgraded stereo system.

The doors have side compartments for more space. 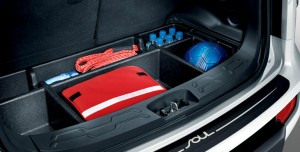 I was initially concerned about the trunk space, especially for this short trip since the car was packed with people, and there no way to push the back seats down for trunk space. However, Kia has figured out how to cram in as much space as possible and in surprisingly ways.

The back trunk is, yes, very small, but if you lift up a partition underneath, there’s a heavy duty styrofoam compartment where you can store small things – and if you need more space, you can pull it out completely and put even bigger stuff things underneath (I was able to fit a backpack in there with no trouble). It really gives you more than enough space. Looks can definitely be deceiving and time was taken to really think this out.

The SOUL also forgoes a spare tire in place of a canister that hooks into your flat tire, fills it with a quick patch liquid so you can get your car to the closest gas station for a real fix.  Luckily, I didn’t have to worry about a flat, but it is an interesting new wrinkle not having a spare – and actually a much easier solution than having to change a tire.

The only negatives on the interior is actually the surprisingly bold choice of emblazoning the SOUL logo on the side doors and the seats. For such a cool car, this little add-on actually feels a bit overkill at times. 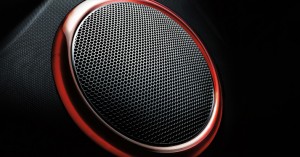 The car also has some cool little stereo speakers in the front. You have the ability to watch the neon trim surrounding the frames of the speakers change different colors, the ability to have the light dance to the beat of the music or nothing at all. This is something kids and teenagers might get a kick out of – and it definitely adds to the hip vibe the SOUL is going for.

The SOUL has soul – it drives very smooth and handles itself well (especially in endless traffic). The Eco-friendly button also conserves gas – so you get a ton of mileage out of a full tank of gas. A little goes a long way, which in this rough economic climate is essential in purchasing a new vehicle.

While there is a SUV feel, the SOUL is compact enough that it fits snugly in most parking spaces. That was actually one of the best perks – because it feels like it will be tight fit, but even in “compact” spaces, there is more than enough room between the cars next to you to get in and out of the vehicle without leaving a dent in someone else’s car (or them doing the same to you).

The SOUL we tested didn’t use a keyless ignition. It’s the switchblade key that pops out at the click of the button – and definitely helps you avoid having a sharp key poking you in your pants pocket.

Kia has picked up where Saturn left off, creating innovative and original cars that are forward thinking and have just the right amount of extras to make them special. The SOUL is a fantastic little vehicle that gets the job done and at a very reasonable price too.