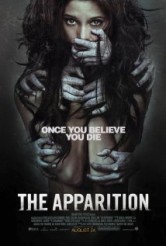 A horror movie with a serious case of exposition issues

THE APPARITION owes a fair bit to the original PARANORMAL ACTIVITY, though it is not (much) a found footage film. Borrowing between horror movies isn’t necessarily a bad thing – last year’s INSIDIOUS had plenty of inspirations and still managed to be very scary – but it can be a problem when the project in question relies on a memorable piece of lore from another source as a primary plot twist. Other issues here are that writer/director Todd Lincoln sets up a lot of suspenseful set-pieces that often don’t pan out properly and that he relies of reams of verbal exposition in places.

THE APPARITION begins promisingly enough, with a group of psychic researchers trying to contact what they believe is the spirit of Charles Reamer. Decades later, several cocky college students decide to do their predecessors one better with a device that supposedly enables them to punch a hole through to the “other side.” The experiment ends abruptly and horribly.

A few years later, pretty veterinary assistant Kelly (Ashley Greene) and her boyfriend Ben (Sebastian Stan) are caretaking/living in Kelly’s parents’ new home inPalmdale,California, one of the few occupied houses in a new development tract. The place is huge, but weird things start to happen – locked doors are suddenly open, there are strange sights and sounds and so on.

So what does all this have to do with the experiments we saw at the beginning of the film? Plenty, as it turns out, but filmmaker Lincolntends to let suspenseful sequences run their courses without optimizing promising moments for scares. One can’t accuse THE APPARITION of going for obvious “gotchas” at every opportunity, which is admirable, but this doesn’t result in sustained building dread here.

Part of the problem is that the characters do things that you don’t have to be a horror movie veteran, just a regular human being, to know are dangerous and counterintuitive – for example, when one character demands that another leave what is clearly a very haunted house, so that the character making the demand is then left there alone. There’s a time for understandable righteous anger, but this isn’t it (nor is this the film’s only instance of wrong-headed character behavior).

Then there is the exposition, concerning not only how the past experiments are connected to Kelly and Ben’s current problems, but what the experiments were supposed to be, what they actually turned out to be, why the scientists thought they could fix the problem, etc. This might play well in a novel, but on screen, it simply plays like hard-to-speak, hard-to-follow pseudo-science-babble. Tom Felton is extremely game in speaking it, but surely there were more visual and visceral ways to express some of these concepts.

The filmmakers deserve credit for adroitly capturing the look and feel of the half-empty housing tracts in the Southern California desert, an environment ripe for fear (in this case, it has nothing to do with the story, but it’s still respectably chilling). Part of the film was shot inGermany, but it all fits together seamlessly.

Overall, THE APPARITION is merely okay. It delivers a few shivers, but it’s mostly a case of style over substance and scares.