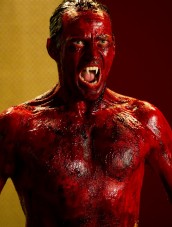 A breathless season finale with huge emotions, amping up rather than resolving this year’s plot

At the end of last week’s “Sunset,” TRUE BLOOD viewers were left wondering how the hell the season could wrap itself up with just one episode. The simple answer is that it doesn’t. Instead, series creator Alan Ball, who scripted the season finale “Save Yourself,” just makes things much more intense by turning one of our beloved heroes into next year’s Big Bad.

As Russell Edgington (Denis O’Hare) threatens to kill everyone inside the faerie nightclub, the faeries and Sookie (Anna Paquin) zap him with their light, to no avail. However, while Russell is enjoying the idea of draining all the faeries, Eric (Alexander Skarsgard) gets the drop on the older vamp and finally stakes him – remember, Russell killed Eric’s human family – thereby avenging a thousand-year-old wrong.

In a panic, vamp Steve Newlin (Michael McMillian) slinks away unnoticed. Sookie finds her brother Jason (Ryan Kwanten) unconscious. When Jason wakes, he’s hallucinating. Eric has to stop his sister Nora (Lucy Griffiths) from attacking Sookie. Eric tells Sookie she has to help him save Bill (Stephen Moyer) from himself – she’s the only one who may be able to get through to him.

When Jason wakes up, he is having visions of his and Sookie’s parents telling him to kill vampires. Sookie is unaware of this, even though Jason is spouting a lot of anti-vamp rhetoric, including a willingness to kill vamps who are his friends, like Jessica (Deborah Ann Woll).

Locked in adjoining cells in the Authority headquarters, Pam and Jessica talk about the looming war. Pam thinks that perhaps vamps are as stupid as humans.

Shapeshifter Sam (Sam Trammell) is brought to Bill as breakfast. Bill recognizes Sam as both someone he knows and as a shapeshifter. Bill sees Sam as a danger to the Authority. When Sam is unable to persuade Bill to value their prior relationship, Sam shifts into a fly and zips into the air duct. Bill has all the Authority security forces searching for Sam, but it’s really hard to find a fly. Sam tells his fellow shapeshifter Luna (Janina Gavankar) to save herself by leaving right now – they can come back for Luna’s little daughter Emma, currently in wolf-cub form (Emma is a werewolf like her late father).

When Rikki is a little better, she tells Alcide that J.D. didn’t rape her – but he did rape some of the younger girls. This is enough to make Alcide decide to go back and challenge J.D. for pack master once again. But Alcide lost last time, and J.D. has the advantage of being jacked up on V. Jackson evens the odds by giving Alcide a little bit of the quality V Jackson saves for emergencies. Alcide goes back to the Bon Temps pack, easily bests – and kills – J.D. and becomes pack master. He gives the approving pack a speech about wolf pack integrity.

At Merlotte’s, Lafayette (Nelsan Ellis), Arlene (Carrie Preston) and alcoholic Jane Boathouse look on in amused astonishment as faerie Maurella (Kristina Anapau), pregnant only for a week, gives birth to quartuplet girls, sired by Sheriff Andy (Chris Bauer). Andy’s girlfriend Holly (Lauren Bowles) is exasperated and hurt by this very concrete evidence of Andy’s infidelity, but she helps deliver the infants all the same. Andy is thunderstruck when Maurella tells him he’s in charge of making sure that at least two of the babies make it to adulthood. She then disappears, leaving Andy to his paternal issues.

Bill tricks Salome (Valentina Cervi) into believing he supports her as the heir to vampire god Lilith. When Salome drinks what she thinks is Lilith’s blood, Bill tells her he’s got the real blood – he shows it to her in a little vial – and that what she drank was laced with silver –but she didn’t detect it because of her own narcissism. Salome admires Bill’s cunning and dies of silver poisoning.

Steve, Emma’s “owner,” comes to take her out for a walk – he’s clearly planning on leaving altogether. However, Steve is intercepted by Authority member Rosalyn (Carolyn Hennesy), who insists that he appear on TV right now to refute (true) rumors that he and Russell slaughtered twenty-two frat boys. In front of the camera, on national news, “Steve” gets so nervous that “he” shifts back into Luna. The camera gets knocked over, ending the feed. Before Rosalyn can attack Luna, Sam in fly form flies into Rosalyn’s mouth, then shifts back to himself, bursting Rosalyn open from the inside. Sam, Luna and Emma (still present in her puppy form) seem safe – but then Luna convulses.

With Eric and Nora there to make it look as though the others are prisoners, Sookie, Jason and Tara are brought into Authority headquarters. They quickly kill every guard they see. They rescue Jessica and Pam from the cells –Taragives Pam a huge lover’s kiss, much to Jessica’s delight (Jessica has been rooting for the two to have a romance). Jessica tells Jason she loves him – to her horror, Jason says he could never love a vampire.

Eric takes Sookie to see Bill alone. Sookie tries to appeal to Bill’s humanity. Bill tries to get Sookie to believe that everything he did from the moment he met her was an act. She knows that’s not true. Bill then says that as a vampire he has been tormented by fear and guilt. Believing in Lilith frees him from those things. To the horror of both Sookie and Eric, Bill drinks down all of Lilith’s blood.

Bill then starts bleeding from the eyes and finally explodes into a huge pool of blood. However, the pool reforms into Bill (at least, it looks like Bill), who roars at Sookie and Eric. Eric yells to Sookie, “Run!” And that’s the end of Season 5.

Part of the reaction is intended: “You’re leaving it there?!!” TRUE BLOOD has ended all its seasons on cliffhangers, but this is surely the biggest yet. With no disrespect intended to incoming show runner Michael Hudis (already part of the show’s writing/producing staff), Season 6 will be the first without series creator Alan Ball at the helm, so whether there will be a change in tone/content is part of the cliffhanger.

Where it goes is wide open. Will Bill now simply be a super Big Bad, or will Sookie continue to try to save him? Can that work? Will re-coagulated Bill have a personality? Who will follow him? Stay tuned.

Seeing all the back and forth that went into it, it would have been nice to see just a little more drama given to Alcide taking back the pack, but in an episode crammed to the teeth (so to speak) with incident, it’s understandable that this plot thread was relatively stripped-down.

It’s a shame to lose Russell – O’Hare was a brilliant villain – but Eric’s quest couldn’t go on forever, and Skarsgard really sells Eric’s satisfaction with achieving his goal. Russell is given a perfect final line (which can’t be quoted here). It’s good to see that Steve survives to be smarmy another day, and McMillian’s turn as the increasingly fuddled Luna is fun and funny.

Is Luna really going to die? If so, is TRUE BLOOD really going to be running two single-dad storylines at once next season? We’ve certainly got Andy in that situation and if Luna isn’t there, it seems like either Sam or Alcide may step in as a surrogate for Emma. Then again, Emma’s grandma Martha – Dickey is rock-solid in the role – has proven her worth, so that element could simply fade into the background. It does seem that we’ve covered an awful lot of ground with Emma, her background and the Sam/Luna relationship only to have the whole thing fade out if Luna goes.

Whatever happens, Sam’s killing of Rosalyn is one of the best ever and Emma the wolf cub remains the cutest thing on television.

As far as the official pairing of Tara and Pam, it continues to seem inspired. The relationship has tons of promise, since both characters have separate, distinctive but choice styles of snark, played superbly by Wesley and van Straten. It seems as though upcoming events are likely to need some ironic perspective, and this is a case where two are even better than one.

In overall action, there is something viscerally cathartic in seeing Eric, et al let loose – true blood, indeed. It feels right within the context of the show, especially in the season finale. Here’s to TRUE BLOOD Season 6 – whatever the hell it will turn out to be.