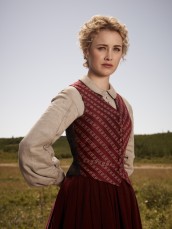 The actress talks her strong character, real mud, plus THE GUARD and BLACKTHORN 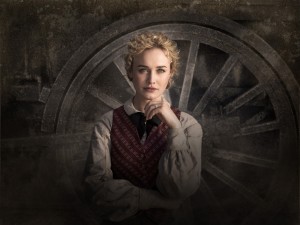 In AMC’s post-Civil War Western  HELL ON WHEELS, which airs Sundays at 10 PM – it repeats throughout the week (see listings for times) – the railroad-building camp is primarily populated by men. One exception to this is Lily Bell, played by Dominique McElligott. Lily is the English wife of an American railroad surveyor – she has been widowed when her husband was killed by the anti-railroad local tribe. However, she’s a force to be reckoned with on her own.

McElligott (pronounced mick-el-i-cot), who is Irish, has been visible as a variety of nationalities this year. In BLACKTHORN, she plays American Etta Place, and in THE GUARD, which just garnered a Golden Globe nomination for leading man Brendan Gleeson, McElligott portrays a prostitute from Dublin. The globe-trotting actress talks about Lily and her other acting adventures.

ASSIGNMENT X: Had you done an English accent before playing Lily?

DOMINIQUE McELLIGOTT: No, no, I didn’t, actually. I went in and asked if they wanted American, English or Irish. They said English and I went with an English accent.

AX: How much did you know about HELL ON WHEELS and the role of Lily when they called you in to audition?

McELLIGOTT: I didn’t know anything, really. I mean, I came over to L.A. and it was my first audition [in L.A.]. So I went in fresh and hadn’t been told a lot. I came to L.A. because I was just back from Bolivia, ironically, and I was doing a Western [BLACKTHORN], and my manager was calling me to come over to America. And I had some friends who said, “You should go, you should go.” 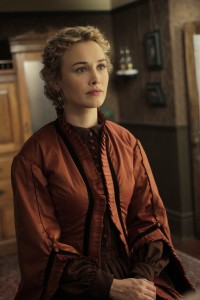 AX: So with HELL ON WHEELS, you’ve done two Westerns in a row?

McELLIGOTT: Yeah. [BLACKTHORN is] based on the story of Sundance and Butch Cassidy, it was kind of a retake on it with Sam Shepard [as the older Butch Cassidy]. It was released earlier this year. It’s a Spanish movie. [Butch Cassidy] hasn’t died, he’s still alive. It’s a very small part, but I play Etta Place in that. So I had done a lot of horse-riding for that.

AX: When you got the role of Lily did you think, “Oh, good, more of this,” or something where you thought, “Oh, no, more horses”?

McELLIGOTT: Well, the things that drive me are the riding and the character. Those certainly are fun aspects of it, right? The horse-riding and all the other stuff that goes with it.

AX: How would you describe Lily as a character?

McELLIGOTT: Lily is no shrinking violet. She’s this Englishwoman, educated, cultured and when she comes over to America, it’s a ballsy move for someone of her class and the etiquette of that day, very unlikely that she would do such a thing. She met her husband in England and he’s American and she’s come back with him to help him with his work. He’s a surveyor on the railroad and one of [railroad owner] Durant’s main men, really, and he passes away, obviously, and she’s left on her own. So from the very beginning, you see that there’s a spark in here that’s something that’s a little bit more. She has a little bit more fire in her and she’s a feisty woman and she learns to deal with a lot. She’s got a lot of strength.

AX: When Lily’s husband passes away, it’s a very violent sequence and she winds up killing the attacker. Had you ever done a scene where your character killed someone before this?

McELLIGOTT: [laughs] No, I haven’t, it was definitely the first time. I’ve never done anything like that in a scene. It was really enjoyable. 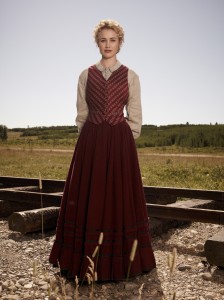 AX: How heavily choreographed was that sequence?

McELLIGOTT: A certain amount of choreography had to be repeated time and time again. You want the prosthetic to work and there’s CGI that needs to be done. So there was a lot of manipulating of the arrow and things like that that went into it. It was important to get it so that it would look as realistic as possible. But it was definitely a lot of fun. You see Lily in those couple of moments, from wounded animal to this ferocious beast.

AX: Is it fun to play somebody with that kind of a healthy self-preservation instinct?

McELLIGOTT: Absolutely. That’s Lily to the core – her journey is one of survival and the constant reminder of being in a place where she could die at any moment, life and death and having to cope and survive. There’s nothing more interesting.

AX: Is the mud they put on you real mud, or is that makeup mud?

AX: Did you do any research for the part into history or surveyors or railroads?

McELLIGOTT: I did, yeah. When I was cast in the pilot, I watched a documentary about the building of the Transcontinental Railroad, and the brothers [series creators Joe Gayton and Tony Gayton] were very knowledgeable in terms of the characters’ backgrounds, and they’d been working on it for over three years. They were just a fountain of knowledge in terms of what it was about, where it was going and my character, as well.

AX: Is this a period of history that was of interest to you before you became involved with HELL ON WHEELS?

AX: In THE GUARD, you play one of two prostitutes who party with Brendan Gleeson’s character. Your character in the film is Irish, so do you just amplify your normal speaking voice for that accent?

McELLIGOTT: Oh, no, no. Actually, she’s from Dublin, so that’s actually a thick Dublin accent. That was fun, because it was fantastic script, very funny. I don’t know if that humor translates. It’s an Irish sense of humor. The Irish trailer is different from the U.S. trailer in terms of content. It’s almost like they made the racial joke [Gleeson’s Irish policeman character keeps teasing Don Cheadle’s FBI character] the primary thing in that trailer, which I was kind of surprised by. Actually, the comedy of it is on Brendan Gleeson, is on that blasé [police officer], who is supposed to be this lawful citizen, and he’s so unlike that in many ways, so the joke is actually supposed to be about Brendan Gleeson’s character, not at all Don Cheadle. Don Cheadle [as the character] is straitlaced – he does things properly, he plays by the rules, does everything the way it’s supposed to be.

AX: You went from working in South America to extreme North America, because even though it’s American, you’re shooting in Canada. Is that like whiplash, is that really interesting?

McELLIGOTT: It is. I do a lot of traveling with this job. I’m very lucky in terms of the places I get to work. I was also in New York this year, shooting something else. I’m like the back-up boy, living out of a suitcase. It’s nice.

AX: Do you have a favorite climate?

AX: What is the interaction between the HELL ON WHEELS show runners and the actors?

McELLIGOTT: I think everybody has a great respect for everybody else. Everybody’s very passionate and enthusiastic, and everybody’s focus is on what they’re doing, so in terms of that, it’s definitely a collaborative process, but I have such faith in everybody and everybody does their job so well that everything kind of flows seamlessly together. There haven’t been any differences, so to speak.

AX: And is there a different style of working with an American company or a British or an Irish company?

McELLIGOTT: Americans – nobody makes TV shows better than the Americans, really. It’s fantastic, fantastic standards. The difference is there’s more money invested, which means better products, and there’s a larger number of people working on any one project, so you’ve got a lot of help and a lot of people. When everybody’s doing their job, everything works like clockwork.

AX: And do you have hopes for where Lily’s character might go in Season Two, if HELL ON WHEELS is picked up?

McELLIGOTT: I hope that she will just grow and develop. She’s a thrilling character to play.