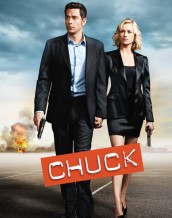 There is definitely something up the sleeves of the team and producers of CHUCK this season. On one hand, it seemed as though they’d written themselves into a corner, but now with “Chuck Vs. The Curse,” it may not be a corner, but a secret passageway. But where that passageway is leading is beyond me.

At the end of last week’s episode, the team at Carmichael Industries – the private spy company founded by Chuck (Zachary Levi) and Sarah (Yvonne Strahovski) – had broken Casey (Adam Baldwin) out of prison. In addition, not only was Chuck being set up by bad guy Decker as the source of the ultimate computer virus, Omen, but Decker got wasted by fellow private spy Verbanski, and Chuck is kind of being set up for that one, as well.

Now, it doesn’t matter that Decker is dead. There’s a new CIA baddy in town – Robyn Cunnings (Rebecca Romijn), and she’s not only out to get the virus, she’s willing to attack Chuck’s sister Ellie (Sarah Lancaster) and brother-in-law Dev0n (Ryan McPartland) to do it. The catch is, Ellie and Devon at first think they’re playing spy, then realize they have to do the real thing to escape.

Which is why Chuck is freaking out, thinking that he has to abandon everyone he loves lest he endanger them – just like his parents did to him. Surprise, surprise, this doesn’t work too well for Sarah.

This is a classic CHUCK episode with most of the usual wit and fun, and Bonita Friederancy back as General Beckman. There are more than a few hints that we’ll be covering some past ground as part of bringing the series to a close, as well. However, the most interesting part is the ending and…. Dang. The no spoiler policy makes this difficult, but there is more than a little something up. Not sure what, but something is up.

Tags: Adam Baldwin, Bonita Friedericy, Cat Squad, Chuck, Chuck: The Complete Season 4, Craig Kilborn, John Larroquette, Joshua Gomez, Lauren Cohan, Linda Hamilton, Mark Christopher Lawrence, Mark Hamill, Mircea Monroe, NBC, Ryan McPartlin, Sarah Lancaster, Scott Krinsky, Season 5, The Complete Season 4, Vic Sahay, Vs The Curse, Vs. Agent X, Vs. The A-Team, Vs. The Bearded Bandit, Vs. The Business Trip, Vs. The Cat Squad, Vs. The Cliffhanger, Vs. The Family Volkoff, Vs. The First Bank of Evil, Vs. The Frosted Tips, Vs. The Hack Off, Vs. The Last Details, Vs. The Muuurder, Vs. The Seduction Impossible, Vs. The Wedding Planner, Vs. The Zoom, Yvonne Strahovski, Zachary Levi, season finale, spies, spy