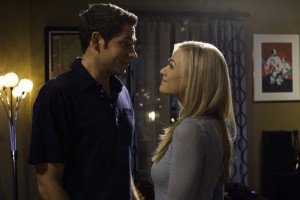 On CHUCK, the spy comedy/adventure/romance series now in its fourth season on NBC (and airing Monday nights), Zachary Levi’s title character, a relatively novice secret agent who still works at the Buy More, has finally proposed to his dream woman/spy mentor/partner Sarah Walker, played by Australian actress Yvonne Strahovski. As Chuck has been pining for Sarah since Season One, and they’ve gotten together and broken apart a number of times, what does this new turn of events mean for the couple? Strahovski gives us her views on this and other developments.

YVONNE STRAHOVSKI: I think it feels like a new leaf, because we’re together finally. I think that’s a huge relief for the fans and for us. I think it’s been a long time coming, but of course, a relationship has its own problems. I mean, every relationship does, so I’m sure we’re going to see a lot of couple drama that goes on between Chuck and Sarah.

AX: Was it gratifying to finally pay of the Chuck/Sarah relationship and not have this unrequited thing?

STRAHOVSKI: It feels like a relationship now. It’s time. As much as we all love

AX: Were you looking forward to working with Linda Hamilton as Chuck’s mom?

STRAHOVSKI: Oh, yeah. That’s [been] awesome – we had fight scenes together.

AX: When the Buy More blew up at the end of Season Three, were you worried about your fellow cast members who played non-spy Buy More employees?

STRAHOVSKI: Yeah, to be honest, I was. I was wondering, “God, what are they going to do? What is going on?”

AX: Would you have missed Big Mike, Jeff and Lester – aka Mark Christopher Lawrence, Scott Krinsky and Vik Sahay – if the Buy More hadn’t come back?

STRAHOVSKI: Sh*t, yeah. It wouldn’t be the same. That’s the beauty of our show – we have this great mix of the Buy More, the nerd stuff and then the spy stuff and the funny. And [those] guys [Krinsky and Sahay] are the stars of Comic-Con.

AX: I know Bonnie Friedericy as General Beckman has become a series regular this year … 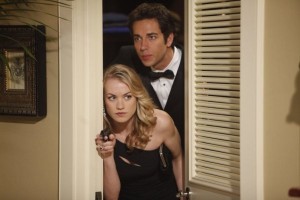 AX: Do you have a favorite scene or episode from Season Three?

STRAHOVSKI: So much has happened, I’m doing a Season Three marathon myself, and I’m up to about episode four or five and I’m going to watch them all again, because when we shoot, we’re in such a bubble and we keep going and going and going, we do so many hours on the show, it’s so hard to have the time to actually sit down and watch it. Of course we know what happened [plot-wise], but it’s like it becomes a bit of a blur, because we work fifteen hours a day.

AX:How do you feel she grew in Season Three and where she’s at in Season Four?

STRAHOVSKI: I guess what I loved about Season Three for my character was when Chuck and Sarah decided to get together, she fell into a comfort zone within herself. She become more comfortable being a human being. She’s always about the spy world andbeing  professional, she’s emotional and can’t talk about it and she finally was opening up a little bit more. And being with Chuck now is going to open her up more and more. She’s more softer and we see a more openly vulnerable side of Sarah Walker this season. As opposed to vulnerable and closed off, I get to be more part of the funny – I’m so much the serious anchor of the show, and now I’m starting to be more in the middle.

AX: Did you do any other projects during the hiatus?

STRAHOVSKI: I went to Australia and I shot a movie – it’s currently called THE KILLER ELITE, though it might change. It’s myself and Jason Statham, Clive Owen and Robert De Niro. It was an amazing experience. I was over there for two months.

AX: Do you play one of the killer elite?

STRAHOVSKI: No. I am Statham’s love interest, but I am not part of the action stuff.

AX: Right when ALIENS came out, Sigourney Weaver had another movie in theatres, HALF MOON STREET, where she got attacked, and it was a bit like, “You’re Sigourney Weaver, you just killed an alien, why are you having problems with one lousy human attacker?” Do you think that people who know you from CHUCK would buy you as somebody who doesn’t explode into action when threatened?

STRAHOVSKI: An Irish guy called Gary McKendry who did a short film [EVERYTHING IN THIS COUNTRY MUST] that was Oscar-nominated and now he’s directing – it’s his first feature. And he is one amazing guy, so much fun to work with.

AX: Was it fun to go back home to Australia to work?

STRAHOVSKI: You know, I couldn’t believe it. I couldn’t believe this movie, of all places, would shoot in Australia [laughs]. I mean, I’m from Sydney and we were shooting in Melbourne, so I was sort of in the wrong city, but still, home is home and my accent comes back. It’s the second hiatus I’ve ended up in Australia now doing a movie [the previous one was MATCHING JACK, directed by Nadia Tass] .

AX: Did you have any kind of feeling one way or another as to whether or not you would get a Season Four on CHUCK?

AX: Well, CHUCK does have some very loyal, activist fans …

AX: Do you feel indebted to the fans for trying so hard every year to ensure the show stays on?

STRAHOVSKI: I think we’re going to be forever faithful that we got Season Three and Four because of our fans. They rally for us. I recently joined Twitter. I felt the pressure from the fans and cast, so I did. I felt even moreso the love and dedication from our fans. I started supporting a dog rescue society – Kenmar Rescue and it’s where I got my first dog from. They were doing this fundraiser and I tweeted out I was doing the thing, if they could donate, donate please. And the response was unbelievable. We had checks coming in from the Czech Republic, the Philippians and England. It was so amazing that people all over the world reached out and helped out.