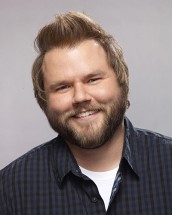 In MAD LOVE (created by Matt Tarses), premiering tonight on CBS at 8:30 pm, Jason Biggs and Sarah Chalke play Ben Parr and Kate Swanson, who essentially fall in love at first sight. Their respective best friends, Tyler Labine’s Larry Munsch and Judy Greer’s Connie Grabowski, on the other hand, fall into sharp-tongued mutual irritation that may or may not mask genuine attraction to one another.

Canadian born Labine, known to REAPER fans as the plain-spoken and often peculiar Sock, brings his sarcastic yet likable chops to MAD LOVE’s Larry. He plays a very different character in the upcoming feature film RISE OF THE APES, and is happy to discuss all of the above in Part 1 of our two-part interview.

ASSIGNMENT X: How did you become involved with MAD LOVE?

LABINE: The funny thing was, this show got offered to me before [Fox’s] SONS OF TUCSON even aired. These are the things we don’t know as actors, but I guess the writing was probably already on the wall over at Fox that SONS was not going to be their flagship show [laughs].

So Matt and Jamie Tarses, who have their ear to the ground professionally and personally around town, they came to me and said, “Look, we want you to do this show,” and I said, “No,” because I didn’t feel comfortable jumping ship on a show that hadn’t even premiered yet. I don’t feel comfortable jumping ship on a show, period – I think some people still think that I did that on REAPER, but that’s absolutely out of the question. The show was canceled [before Labine took other work]. So I turned it down and [SONS] did not do as well as we were anticipating [laughs], but I was like, “Oh, man, that’s too bad, an opportunity lost,” because I really wanted to work with [Jason] Biggs, but I thought it was gone, and then they came back to me anyway a couple months later and said, “Would you still consider doing it?” and “Let’s go talk to the people at CBS,” and I had a couple of other offers on the table and Matt Tarses took me out for coffee and completely swung my boat in his direction, and here we are.

It’s really flattering, because as an actor – or I think any professional – there are neuroses that creep into our minds and you think, “Okay, I’m done, my career’s over now,” and so that somebody was thinking about you in another role is always really reassuring. 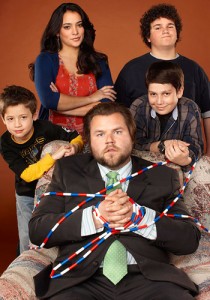 AX: After SONS OF TUCSON, where your co-stars were three minor boys – your character was posing as their father so he could get money and the boys could get on with their lives without going into state custody – are you happy to be working with adult co-stars again?

LABINE: [laughs] Yeah, I’ve got to stop talking about just exactly how happy I am about that. Yeah, it was great working with the kids, I learned a lot, I was basically a part-time father to three young men who I’m still very good friends with to this day, with their real fathers actually being there. It was very informative. It was pretty awesome. I’m saying it’s a lot like watching the show – I learned how to be a father. I had to learn about how to work with kids, especially the youngest guy. It was very challenging at times, but very good. I [was in] in pretty much every scene, which I’d never done before, it was my first lead in a show and it was exhausting, but very, very rewarding, too. Especially with guys like [producer/director] Todd [Holland] at the helm. He just leaves the camera up and just rolls and you’re just go, go, go.

But there are certain benefits of working with – especially three other established comedic actors. We can throw down – you can throw curveballs at each other and have them thrown back, whereas a nine-year-old boy might not be able to do that. I definitely enjoy the ensemble aspect of being in a show. There are a lot of people to lean on, a lot of interaction. I rely very heavily on natural interaction as an actor with my other cast members and I think I find myself more drawn to ensemble than being a solo act.

AX: On SONS OF TUCSON, was it also challenging playing opposite actors who were all substantially not only younger but shorter than you?

LABINE: Actually, physically speaking, posture-wise, I played a lot of stuff down the end of my nose, sort of looking down at the kids. It does change sort of a lot of your cadence when you’re talking to someone when you’re slouched over. I think after awhile, I just adapted to that. I just knew that I was going to be looking down at the kids and you just sort of find a way to do what you want to do anyway, whilst slouching. The thing about the kids was that I never knew how long they’re going to be available. They’re going to go to school, they have to shoot shorter days, so a lot of times, I would shoot their sides of the scene to get a master or their side of the scene and then they left for school and then I would have to shoot the rest of the scene with stand-ins or tennis balls on the end of C-stands, so I learned very early on, make every shot with the kids count. 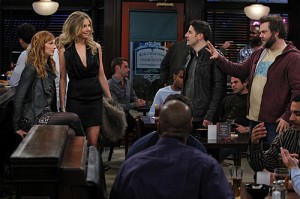 AX: Now, in MAD LOVE, your character is a lawyer …

LABINE: Yeah, I’m a lawyer. Actually, I’ve been a lawyer quite a bit. On BOSTON LEGAL, I was a lawyer and KEVIN HILL, I played a lawyer. So it’s neat – I have my black law dictionary, my legal dictionary, back home. So whenever they think they’re going to challenge me with a little legalese, I’m like, “Nah, I’m on the page, man, I know what’s going on.” That’s something I keep saying to [producer] Matt Tarses – “You say I’m a lawyer. Give me some form of responsibility.” It just seems like Larry is either eating in Biggs’ office, or he’s trying to steal a car – there are all sorts of crazy things that are counter-intuitive from being a lawyer. However, this last episode, they finally put in a little bit of legalese for me and I get to sort of flex my might.

AX: The characters you play are often eccentric, but you seem to play them with the idea that they expect the people that they interact with to see things from their point of view …

LABINE: Yeah. I think [Larry] is constantly dumbfounded that people don’t see the world the way he sees the world, which is a much simpler way to see the world, I think [laughs], it’s just sort of saying what you mean all the time, coming out with it and just saying it and doing it and walking the walk. I guess the most interesting thing about that is, a lot of the time, that’s off-putting to other people and the characters around you have to be like, “You’re crazy!”, but you still need the audience to link up with you and go, “No, no, he’s not that crazy, that’s how I wish I could do it, too.” You know what I mean?

AX: Do you have to be careful not to come off too caustic with these characters?

LABINE: Yeah. I think that’s the thing I’ve proven that I can do, is sort of be this acerbic character and still be likable. I honestly don’t know how I do it sometimes. I think it may just sort of be a likable face. It’s a trait, because I’m roly-poly or whatever. But as actors, we do have to be aware of how far we take the intention – it has to be more banter-y. We all have friends we banter with, and the banter has to walk a line of almost flirtatious venom. [Some] idiosyncratic qualities or physical attributes maybe lend themselves to being more likable, whereas I consider the words I’m saying to be a little more – that’s just one of those things that was made obvious to me much later in my career, where people go, “Well, we can kind of make [your character] say anything [and still be sympathetic].” I was like, “I guess …” [laughs] I think we went a little too far a couple of times in other instances. You can’t have [the character] say anything …

AX: Would you ever talk to a woman or –

LABINE: Talk to women? Ew, no!

AX: Er, that is, talk to a woman the way your character Larry talks to Judy Greer’s character Connie, or go out with a woman who talked to you the way Connie talks to Larry?

LABINE: I would – I’d probably be a sucker for that. I’m the type of guy who likes to be pushed around a little bit [laughs]. I like to treat ladies nicely, I’m a little more of a gentleman, but I will admit there are a few people in my life that I’ve met along the way – there’s an undeniable chemistry with somebody of the opposite sex who – that’s your thing. You banter back and forth. You just like to poke at each other and jibe each other. I’m very familiar with that scenario, because that’s how my wife and I sort of met back in the day. We’d tease each other. It’s playground time – you pull my hair, I pull your hair and you kick me in the balls or whatever. It’s not unfamiliar to a lot of us. We all have certain friends you can banter with.

As a rule, I wouldn’t walk around just completely taking women apart. There is a certain sort of power that works within a very specific realm where you can sort of gain traction with a woman by being sort of cruel, I guess, but again, where does that lead to? It’s just going to lead to a dead end eventually. All the game-playing stuff, unless all you’re looking for is just some quick action or whatever, it’s not going to lead to a good relationship.

AX: Speaking of good relationships, you and your wife are new parents as of this past December …?

LABINE: Yes, her name is Maya Paige Labine. I love her so much.