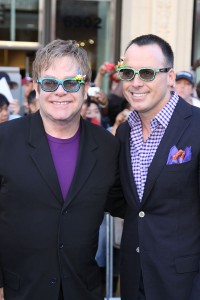 Elton John considers life an extraordinarily unpredictable adventure with no necessary time line of events to meet. You just take it as it comes to you. For example, he was in his mid forties when he assumed a new career in composing and producing songs for such musicals as THE LION KING and BILLY ELLIOT.

And now at the ripe old age of 63 he and his long time partner David Furnish just adopted twin boys. The proud papa couldn’t be more excited to share his newest venture.

“It’s fantastic,” he admits. “I love the smell of nappies and diapers. Obviously, it’s been the most wonderful thing that’s probably has ever happened to me after meeting David. The most surprising thing is that it’s been very relaxing because this little soul that you’re feeding and you’re changing, you’re bathing and you’re telling bed time stories to is a blank palette, a blank canvass and all it needs is love and nurturing. It’s just the most wonderful feeling. When it gets to talking or running around, I’ll probably feel a little different.”

Although John has a hard time not talking about his two new joys, he does take five to discuss the birth of his new animated film GNOMEO AND JULIET (which he executive produced and provides songs for) which takes the classic Shakespeare story and places it in the backyard valley of garden gnomes.

On deciding what music should be used in the film…
“Originally, it wasn’t going to be all my music,” says John. “There was one obvious song that would fit in the movie which is ‘Saturday Night’s Alright for Fighting’ for the lawnmower race. That wasn’t my idea; that was already, I think maybe [director] Kelly [Asbury’s] idea. From that point on, I really just handed it over to [composer] James [Newton Howard] and the rest of the team to put it in. On the whole, I think James has done such a great job because even though it’s all our back catalog and a couple of new songs, it doesn’t feel a little bit overbearing and it’s an Elton John movie. It feels like GNOMEO AND JULIET with some good music in it. I’m glad that it’s turned out like that because I didn’t want it to be just’ bang-bang-bang’ old catalog stuff. “

On the film’s political message for America…
“We started the film 11 years ago and if we would have the foresight to do that I would say we’re f**king geniuses,” says John. “But, it just happens to be at this time, it’s coming out three weeks after the President made the speech in Tucson. I do feel as though there is a message in the film of we spend so much time hating each other. I think this is a storyline saying that we should all get on, even if we’re Catholic or we’re Protestant or we’re Muslim or we’re Jews…or if we’re Democrats or Republicans. I think in America it’s gotten so far outstretched now where the rhetoric is so dangerous and it puts things in people’s minds. It’s so unnecessary, and if there is any message that can come out of this film which is purely coincidental and the timing is coincidental then I’m all for it. I played at a Proposition 8 concert the other night. The two great lawyers who are fighting for this same sex relationship recognition in California – one is a staunch Republican, one is a staunch Democrat and yet they met and they both think this is the right thing to do. That is what life is all about. It’s not about hatred. I think in the film at the end of this, when they have destroyed both of the gardens they actually say, this is ridiculous. Let’s just get on with our life, let’s be friends. I think that sends out a positive message but it truly is coincidental.”

On what he’s learned  doing musicals …
“THE LION KING came my way in 1993 thanks to Tim Rice,” says John. “I have always collaborated in my career as a songwriter. I love the idea and the journey of collaboration with everyone on the LION KING. I’m a team player really. That’s why I like doing the musicals. I’ve always had a song writing partner as I’ve said. I think what you learn most of all is leave your ego at the door. For example, BILLY ELLIOT, we left three songs, which are really great songs out of BILLY ELLIOT because it would have made the show four hours long. You have to be prepared to say, ‘okay, I’m going to fight for this song but if you really want to get rid of it, then that’s fine.’ If I were to say, ‘this song is going in or I’m walking off the film.’ There is none of that sh*t. You just have to be patient and you have to watch things how they evolve and you have to be there for the good of the thing as a whole and not just for you as a component of a piece.” 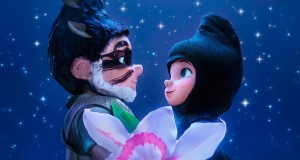 On how diverse his career has become and what he hopes for the future…
“There is always things you want to do and obviously ballet is not an option,” says John, who laughs. “I’d just like to make a really great film about my life story. We are thinking about that. We have a great script already by Lee Hall who wrote BILLY ELLIOT. Obviously it’s not going to be your normal run of the mill film because my life has been kind of crazy. I think it’s important to do a kind of surrealistic look/take on my life. I’d love to do that. You see this business is so incredible. I don’t know what’s around the corner and that’s kind of the way I like it. You really can’t plan. It just happens by accident. You never know what gig you’re going to be offered – that one part and one show or one project can change your whole life. That’s the way I look at it. I don’t really have any more ambitions other than I just want to work on excellent stuff and enjoy it. I’m enjoying everything in my life. I think the element of surprise in this business is what makes us really love it because one day you’re sitting by the phone waiting to do something or not doing anything and the next day you get the chance of a lifetime. Those little phone calls don’t come up so often but when they come up, it’s fantastic.”

On going out on tour at this stage of his life…
“I think it’s so much more comfortable for me now,” says John. “I’ve always enjoyed and loved playing live. I relish and cherish it more than anything else because you never know what the performance is going to be. These guys will tell you if you go on stage some nights and you do a performance and you’re feeling great sometimes you’re not as great as you think you’re feeling. Some nights you’re feeling tired and you give a really great performance. It’s the unknown. You don’t know being a performer what kind of performance you’re going to give. You know you can give a certain quality of performance. As I grow older, I’m much more content in my own skin because when I come off stage now, I have a balance in my life. Now, I come home, I fly home every night after a show and I get back to my own bed and I have a wonderful partner, I have wonderful friends. I can remember things. I don’t take drugs anymore. It’s a whole new world out there. [laughs] I can remember the words to the songs. [laughs]. It’s just sensational what’s happened to me in the last few years. Truly, the older I get, I think I’m singing better live. I enjoy it. I had my eyes done about eight years ago. I had replacement lens surgery because I was so blind. But now with 20/20 vision, I can see all the signs that the fans have, all the album sleeves, and it makes a difference. I really appreciate my performing so much better now as I get older than I did. I don’t take it for granted anymore. I really relish it and love it.”