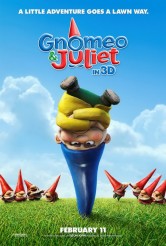 It’s concrete instead of plush and a different set of filmmakers, but there’s something agreeably Muppet-like about this fractured take on Shakespearean romance

What would it look like if a bunch of 3D animated garden gnomes danced to famous Elton John/Bernie Taupin songs? If this seems like a strange question, rest assured that the answer is equally loopy in GNOMEO & JULIET.

Adapted very, very loosely from William Shakespeare’s similarly-titled tragedy, GNOMEO takes us into a world where, a la TOY STORY, inanimate objects come to life whenever humans aren’t around. Instead of children’s playthings, the main characters here are garden ornaments, primarily gnomes. The garden here is divided down the middle of a duplex yard, with blue-loving Mrs. Montague (voiced by Julie Walters) on one side and red-appreciating Mr. Capulet (voiced by Richard Wilson) on the other.

The neighbors’ dislike of one another is echoed as a sort of territorial rivalry in their back yards. Gnomeo (voiced by James McAvoy), a blue-hatted garden gnome, is happy to brawl with the red-hatted gnomes on the other side of the wall – until one night he winds up outside and encounters Juliet (voiced by Emily Blunt). As both are camouflaged, neither recognizes the other as “the enemy” until they are already smitten and it is too late. But who among their separate family and friends will condone their union, when indeed lawn mowers of mass destruction may come into play at any moment?

Director Kelly Asbury, a large group of writers and an even larger squad of 3D animators strike a tone here that is unusual enough to be intriguing. We’re not laughing and crying the way we did at the TOY STORY films, or feeling as though we’re taking flight a la HOW TO TRAIN YOUR DRAGON, but everything in GNOMEO is just incongruous and spontaneous-feeling enough to keep us engaged. For one thing, beyond the red/blue feud (given no more rationale than the Montague/Capulet enmity of the original) and the Gnomeo/Juliet love at first sight, we can’t predict where too many things are going. Set-ups pay off and sight gags about – one of the best is the way that aggressive Capulet gnome Tybalt is made to subtly resemble Jason Statham, the actor who provides his voice.

Then there’s all the singing and dancing. For those who remember Elton John’s guest turn on THE MUPPET SHOW, singing “Crocodile Rock” with a bunch of Henson Shop amphibians, the mood is oddly similar. Come to think of it, there is a hint of Muppet-style madness overall, though there’s no one truly outrageous presence a la Miss Piggy, nor a lone voice of sanity like Kermit. Gnomeo and Juliet are relatively straightforward characters, though Gnomeo does get to have an argument with a statue of Shakespeare (voiced by, who else, Patrick Stewart) where the character voices thoughts that will have occurred to plenty of English and drama students over the years. As for why the songs are specifically from the Elton John canon, the songwriter is the film’s executive producer and composer, with lyrics by his customary compatriot Bernie Taupin.

GNOMEO & JULIET will leave youngsters not much the wiser about the Bard, but if amusing and occasionally inspired silliness with a good heart is what’s wanted, it can be found here.