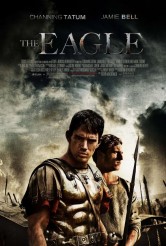 Director Kevin Macdonald and screenwriter Jeremy Brock, the team that previously brought us THE LAST KING OF SCOTLAND, now set a tale in actual, albeit ancient, Scotland. Although THE EAGLE is much more steeped in legend and natural beauty (the film was shot in Scotland and Hungary), the filmmakers manage to bring the moral ambiguity levels impressively high, even as swords clash and honor is paramount in the minds of virtually all characters.

Through one of those strange quirks of fate and timing, THE EAGLE seems in many ways like a sequel to last year’s CENTURION, even though personnel and production-wise, the two films have nothing to do with each other. CENTURION told of what happened in 117 A.D., when Rome’s Ninth Legion was dispatched to the far north of Britain (the region now known as Scotland) to conquer the locals.

In THE EAGLE, based on Rosemary Sutcliff’s novel THE EAGLE OF THE NINTH, it’s now 140 A.D. The five thousand men of the Ninth Legion, along with their gold eagle standard, have never been seen again in the Roman world, something that so alarmed Emperor Hadrian that he has caused a huge wall to be built, cordoning off Britain’s north from the rest of the land. Relatively youthful Marcus Aquila (Channing Tatum), son of the vanished legion’s commander, takes his place as top officer at a Roman outpost.

Though the men are initially doubtful of his leadership, Marcus proves himself both heroic and shrewd in fending off an attack by the natives. Alas, Marcus is sufficiently wounded in combat to receive an honorable discharge. Since the only thing Marcus has ever wanted is to be a soldier and restore his family’s good name (tarnished by the loss of the Ninth Legion and its eagle standard), he’s at loose ends. Finally, he decides to head north beyond the great wall in the hopes of discovering what became of his father, the legion and the eagle. Marcus’ sole companion on this quest is the slave Esca (Jamie Bell), a Briton whose life Marcus saved. Although Esca is honor-bound to aid his rescuer, the Briton has good reason to hate the Romans, and his ultimate loyalties are a source of tension for both Marcus and the audience.

Macdonald breaks with the usual tradition of having Romans speak with English accents; instead, the Romans here have American accents, while Esca has British intonations. (The rest of the Britons speak subtitled Gaelic here.) Impressively, screenwriter Brock has come up with dialogue that is neither too modern nor too musty, and the actors deliver it naturally.

Tatum has a good mixture of yearning, pride and fierce determination, along with an undercurrent of doubt as it slowly dawns on him that the ferocious tribes might have some legitimate grievances against the Roman occupiers. Bell begins his turn as Esca with a scene of mingled courage and terror, which segues to great restraint and then to something else as story and character become more complex.

Donald Sutherland is enjoyable as Marcus’ worldly, hospitable uncle, Tahar Rahim is wonderfully fierce and expressive as the prince of a particularly formidable clan and Denis O’Hare (lately so magnificent as King Russell on TRUE BLOOD) is warmly engaging as Marcus’ subordinate at the Roman fortress.

Cinematographer Anthony Dod Mantle gives us one beautiful, mythic image after another and sword master Richard Ryan stages a number of rousing, suspenseful and varied battles.

With its visceral action and simple but powerful points about how good and evil are largely in the eye of the observer, THE EAGLE is a superior representative of the historical adventure genre.