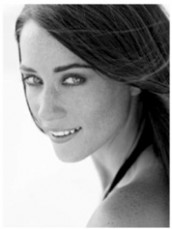 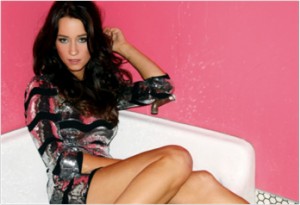 Last season, we learned that seeming loner Casey had once been engaged – and we learned along with Casey that relationship produced a daughter, now a young woman Alex McHugh, played by Mekenna Melvin. Alex has since learned that her presumed-dead dad is still alive, though her mother (up until last week) believed Casey was dead.

In this exclusive interview, California native Melvin talks to us about what it’s like joining the CHUCK family.

ASSIGNMENT X: First of all, have to ask – do you know yet whether CHUCK may be coming back for a fifth season?

MEKENNA MELVIN: No, I have no idea. There are rumors around that maybe we will, maybe we won’t, but we don’t know anything, either. This is my first full season, I came in at the end of last season. I am optimistic and hope that it comes back for another season, but you never know, and nobody knows for certain. I’m sure that when you guys find out is when we’ll be finding out, too.

MELVIN: It is, yeah.

AX: Did you know Alex was a recurring character when you were first cast?

MELVIN: I had no idea. The initial audition that I went in for was, “Twenty-something-year-old girl, one word,” and the word was, “Mom.” I had no idea she was going to be John Casey’s daughter. That was all revealed once I booked the one-word co-star. They said, “Oh, you have a name. It’s Alex McHugh and you’re playing John Casey’s daughter that comes back.” And I thought that was the most exciting thing ever. Then after I shot that episode, a few months later, my manager gave me a call and said, “The show is going to flesh out that character and bring her back,” but since I didn’t have a lot on my resume, I had to go back and re-audition for the role with more sides [script pages]. They put me on tape and I was so terribly nervous, but it all worked out really well, and then the character just grew from there, so I was so extremely grateful and definitely was not expecting it to turn into this.

AX: Were you a fan of CHUCK before you joined the show?

MELVIN: At the time I got on the show, I was a waitress and working night shifts, so I barely got to see the show when it was airing, but I had seen episodes here and there and loved it.

AX: Your mother taught acting while you were a child. Did you grow up figuring this is what everybody did when they grew up?

MELVIN: Well, not necessarily what everybody did. My mom was a local drama teacher and she directed local plays. So it was on very much the local theatre level. She was a high school drama teacher. So I grew up in the theatre loving it. I didn’t go to day care. I would go with my mom after school and help build sets and watch the rehearsals, so I fell in love with drama through her and her teaching me about it. She would take me to Ashland, Oregon [for the theatre festival] every summer and to San Francisco, but for me, [a professional acting career] definitely seemed like something really far away, like, how do I take this thing that I love so much and can I actually make a career of it? I didn’t know anyone in my real life who had ever really made a career as an actor in L.A., so no, it seemed very foreign.

AX: When you were cast as Alex, when you started to have more scenes than just saying “Mom,” how much did they tell you what they wanted for the character and how much did you decide for yourself what she was going to be like?

MELVIN: I was able to bring a lot of myself and my own choices to her. It is an interesting thing that I’ve talked about recently – when you have a play or a movie, you have the beginning, middle and end, and you know exactly what the character’s overall arc is going to be, so this is how it starts and this is how it ends and this is how she gets there. On TV, I don’t know these things, I learn and evolve with her every day, as I get the scripts. So I feel like every day I’m getting to know her a little bit better. There is some directorial stuff.  Adam [Baldwin], who plays my father, and I will talk about things, [including] some stuff that he brought to his character, [for Alex] to maybe just have those traits innately, so I have fun playing off that kind of stuff. So it’s a collaboration, but a lot of it is stuff that I bring myself.

MELVIN: I think that’s really hard. I think Alex’s opinion at this point is that, in a previous episode, we see her mom come out, she has a new boyfriend. I feel like as a character, for the first time in a long time, my mom has finally allowed herself to find somebody she really loves, and so while I’m sure there’s a part of any child who wants their birth parents to be back together, I’m very protective of my mom, because for most of my life, I’ve seen her be kind of alone when it comes to love. I think in terms of how I play it, I would love for Clare [Carey], the woman who plays my mom, to come back, because I love her and I think she’s a great actress. So I don’t know. I’m interested to see how all that’s going to play out. I have no idea how it will all go.

AX: Were you surprised when Alex got romantically involved with Morgan?

MELVIN: [laughs] Towards the end of Season Three, somebody made a joke, like, “Oh, yeah, you and Morgan are going to get together.” But that was just a joke, with no understanding that that would actually happen. I was like, “No way. It would never happen.” So then when it did, I was excited. I mean, I think it’s really fun to have not just the daughter storyline, but also the girlfriend storyline, and I think Alex’s very presence creates really funny comedic parts for both Josh and Adam’s characters. It does something funny for their dynamic, which I think is really fun for the show. Some people had suspected [the romance might develop] – I don’t think I was necessarily one of those people expecting it, though [laughs].

AX: Were you extremely surprised when Alex and Morgan painted each other in the living room as part of a romantic experience?

MELVIN: [laughs] Oh, my gosh. That was by far one of the funnier things ever shooting. We shot that scene for a long time, and I had to sit [cross-legged] Indian-style, and so did Josh, for long periods of time. I remember my sides were cramping up. We had so much fun. It was so ridiculous and there were bloopers and dailies that we all saw. They were hilarious. It was so much fun.

AX: Are those going on the DVD outtake reel?

MELVIN: I don’t know. Let’s hope that they do. There was some crazy, funny stuff that happened. Obviously, not everything that we shoot makes it to the day it airs, but it was so much fun.

AX: Did you have any say in how you applied paint to Morgan?

MELVIN: No, but Josh was definitely like, “Just lather it on,” and I was really lathering it on, and then he was like, “Okay, maybe not the nostrils” [laughs]. We were blindfolded, so we couldn’t really see anything. I was trying to keep underneath, but literally, I couldn’t see him. We were just doing it. It was just in the moment.

AX: Do you want Alex to get more involved in the spy stuff, or are you happy to have her be a civilian?

MELVIN: Obviously, I, McKenna the actress, would love for her to be part of the spy stuff. [On] the “Cat Squad” episode, when all the girls swing down, I was like, “Oh, I wish I got to wear a cat suit and drop from the sky and do all the cool fun stuff” [laughs]. I think it would be great. I have a black belt in martial arts, so that’s something I would love to be able to bring into it, but who knows? Who knows how my character will play out in the series, but I think it would be fun.

AX: This past year, you were on an episode of DETROIT 1-8-7. How was it working on location in Detroit?

MELVIN: It was one of the best experiences I’ve ever had. I really fell in love with the city. I loved working with that cast, especially Erin Cummings [who played Dr. Abbey Ward]. She was so wonderful. And the cast itself – we all went to a Tigers game, and they were just so wonderful and welcoming. I had an amazing experience. I also had two days off while I was there. I thought, “What am I going to do for these two days?” So I brought my camera and went around the city and took pictures of the architecture. The people who are there love their city and they’re very sure it’s going to come back, and they want to see it come back to the greatness that it was. It’s an infectious energy, and I loved it.

AX: You’re also in a feature film called AMBER LAKE, playing a character called Amber. Are you the lead in that?

MELVIN: Well, there are actually three characters named Amber. Polly Cole, Natalie Smyka and myself, we all play Ambers. It’s kind of a psychological thriller/horror little independent film. We didn’t have a lot of money to make it, but it was a fun experience to make a film like that.

AX: Do you have any other upcoming projects we should know about?

MELVIN: I have a lot of stuff potentially in the works, but nothing that I can talk about right now.

MELVIN: I guess maybe just thank you so much to the CHUCK fans. Like I said, last year, I was a waitress, praying that I would be able to pay my rent, and this year, I have been embraced by this amazing community of people who have supported me and who have been supporting the show for a very long time and I feel so lucky to be a part of it all.