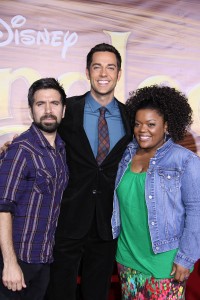 NBC’s CHUCK, now in its fifth season in its new timeslot on Fridays at 8 PM, is the brainchild of creators/executive producers Chris Fedak and Josh Schwartz. The title character, played by Zachary Levi, started out as a nerdy employee at the Buy More who was transformed into an inexperienced super spy when his brain became filled with the Intersect, a wealth of espionage knowledge that also (at the end of Season Two) included fighting skills. Over the years, Chuck fell in love with and finally married his spy handler Sarah, played by Yvonne Strahovski, and befriended grumpy fellow spy John Casey, played by Adam Baldwin. Joshua Gomez plays Chuck’s best friend and fellow Buy More worker Morgan, who only recently learned of Chuck’s secret life.

At a party thrown by NBC for the Television Critics Association, actor Gomez sits down to talk, then sees Fedak and waves him over to join the conversation. What follows is a freewheeling discussion of all things both CHUCK and Morgan.

ASSIGNMENT X: Morgan has gone through some epic changes since the series started. At the end of Season Four, were you saying, “What do you mean, I’ve got the Intersect?”

JOSHUA GOMEZ: Yeah, a little bit, but to be honest, like Morgan, myself, I was like, [happily excited] “I have the Intersect? Okay!”

CHRIS FEDAK: Last year, we were working on the [Season Four] finale in my office and Gomez made the mistake of coming by, and I said, “Come over here, I want to show you something.” I showed you the last page –

FEDAK: “Read this, I want to see what you think of it.”

FEDAK: Yeah. He said to me, “You’re about to make a terrible, terrible mistake.” 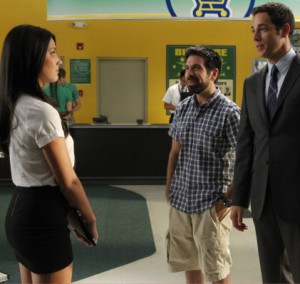 GOMEZ: [laughs] “This is just a colossal TV mistake.”

FEDAK: “A ghastly error,” but I stuck to my guns. “I made a terrible mistake, but I’m going to stick to it.” What we found is that Josh is amazing. Throughout this season, Josh has just been an incredible, iconic force on the show, so we were really excited to see him in that role, not only as the Intersect, but as the new hero. It also means that Chuck is in the position of being Sarah Walker, being the handler. And that’s a great change-up for this season.

FEDAK: You know what? I had no idea. I think for us, we always build our finales as if we want to tell the most exciting prologue possible. So that’s the way we saw it, is like, “I want to see that show [implied by the season finale].” I wrote that ending, and we hoped to come back. But we didn’t know.

AX: NBC is touting this as the final season of CHUCK, which they’ve said will consist of thirteen episodes. Might you go beyond those thirteen?

FEDAK: That’s really up to NBC. We leave it up to them. It would be awesome – the cast, the crew, the writers – for us, what we want to do is tell the biggest, most exciting story possible. And that’s what we intend to do. And if there’s any more to say, and you get even more CHUCK episodes, we would be thrilled. We would figure out a way to do it. [joking] We would have to bring Morgan back to life, I guess, ‘cause you’re dead.

AX: Prior to CHUCK, did you normally get cast as geeky characters, or is Morgans a departure?

GOMEZ: I would say my roles [are] not always full-on geek – they lean towards the geek.

AX: Do you know how to do anything Morgan knows how to do? For instance, can you fix a computer?

AX: In real life, have you had any subsistence jobs like working at Buy More?

GOMEZ: Yeah. I’ve had the retail job. And I’ve actually done the electronics stores and electronic instruments and whatever, but yeah, I’ve done that. I’ve done some terrible jobs on the way to glamorous Hollywood [laughs].

AX: Has that ever affected how you play Morgan on the job? Working on the Buy More set, do you ever feel like, “I’ve worked so hard at my acting career – and I’m still working in a retail workplace”?

GOMEZ: You know when they say “Cut,” it’s a set and you’ve got this amazing crew and these amazing actors around you and you go, “Oh.” It kind of brings you back. “I’m not in an electrics store, I’m not selling appliances.” So it’s easy to separate. But I will say that there are definitely some fun things that I threw in the pilot from my own experience that I like. I was terrible with customer service. I was a bad customer service guy. A little secret for you.

AX: When you were trying out for Morgan, did they have you audition with Zachary Levi to see if the two of you had chemistry?

GOMEZ: They did. My final test was with me and Zach. And that went amazing. It was such a good thing to have him in there, to have the guy with you. He had the job already, so he was already the guy. I have so much fun with him. He’s just so easy to riff with – we just go off the script way too much.

AX: Were you a fan of the spy genre before you were on CHUCK?

GOMEZ: Oh, man. All the genres in this show are so up my alley and that was what was so amazing for me, made me so thrilled to be part of the show, because I read it and it had the spy themes and ninjas and videogames and it’s a combo of all these things that I’m a total geek for, so yeah, very cool. I’m a geek for this stuff and this is a show I’d watch. And believe me, that’s geek-certified.

AX: What has surprised you most in Morgan’s development over the seasons?

GOMEZ: Surprised me? Not too much. You know, it’s funny. It’s like any show. You kind of start in this one place and you discover things. Initially, I’m the best friend who’s there, whether it be for comic relief or then he eventually presents an inadvertent stumbling block for his buddy, whatever it is. But as it went on, you realize there’s a lot more to this character, there’s a lot more to be told. But nothing really surprises me. The only thing that surprises me is having the Intersect. [to Fedak] I think it’s a genius idea. I will not let you down.

FEDAK: No, you won’t. You’ve already done a great job. The thing I would like to add to that is, I think the amazing thing for watching the Morgan role in the storytelling is, I love when the sidekick becomes the hero. And I think what we’ve found with our cast is that really all of our cast members should have a TV show of their own, and I think this season, especially for a portion of it, we want to tell the show of what it would be like if Morgan was the hero of the show. Because Gomez is amazing. Gomez has all those skills. He should be the star of his own show. McPartlin should be the star of his own show. Sarah Lancaster [who plays Chuck’s sister Ellie] should be the star of her own show. These are all really amazing, gifted cast members.

FEDAK: I think the Casey/Morgan relationship just has been a great comedic relationship. Our show is kind of a mash-up of shows – part action show, part comedy show and part relationship drama. And for us, the Morgan/Casey relationship is our ODD COUPLE. The moment we saw Gomez and Baldwin kind of fuse together, it was just so much fun, we had to write to that. This season, we’ve got a lot of that in the show, but it’s going to be fraught with a lot of really interesting drama. We have some very exciting stories coming up.

GOMEZ: Yeah. [In previous seasons], there was a lot of Morgan/Casey interaction at the Buy More. Again, it was very fleeting. It would be this little face mash, there was a lot of physical [comedy]. It was great to do that. Adam and I got together and just had a lot of fun and had this great chemistry. One of the great things about this show and about this cast is that you can roll a dice and match up whoever you want to match up, and it works. I think we’re all fortunate. You don’t have too many pairs where you go, “Oh, that doesn’t really work.” We all really jell together.

FEDAK: We’re actually working on a story right now, which is the Adam Baldwin/Vik Sahay pairing. Lester and Casey. That’s something we’re very excited about.

GOMEZ: Yeah, I think a lot of people are very excited to see it. Again, there’s other stuff that I’ve done before. [Television is often] very niche. If you’re doing a procedural, that’s what you’re doing. If you’re doing a cop show, that’s what you’re doing. CHUCK is so many things, you’re always challenged. It’s a chance to do comedy and romance and family, action and espionage. There’s always something there to challenge you as an actor. For me, I would say dancing is always a big challenge, and we might have done some dancing, and I will say, not my forte, but I will give you a hundred percent and you’ll make it work somehow.

FEDAK: He’s a great dancer. The man is an amazing dancer.