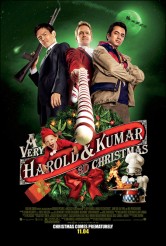 Absurd, profane and more surreal than ever, those stoner best buds Harold (John Cho) and Kumar (Kal Penn) are back in A VERY HAROLD & KUMAR 3D CHRISTMAS. There’s nothing misleading about the title – there’s tons of 3D, nearly all of the set pieces involve Christmas and the movie is indeed very Harold & Kumar.

3D CHRISTMAS starts with Harold and Kumar on the outs. Harold is now a successful Wall Street businessman fretting over a Christmas weekend visit from his wife Maria’s (Paula Garces) family, especially her glowering father Mr. Perez (Danny Trejo in full death-glare mode). Kumar is living in stoned squalor after having been ditched by his girlfriend Vanessa (Danneel Harris), who turns up to tell him she’s pregnant. Kumar doesn’t react swiftly enough (again, he’s stoned) and Vanessa takes off, adding to the man’s misery. Then a package addressed to former roommate Harold turns up on Kumar’s doorstep and Kumar undertakes to deliver it. This leads to a frantic search for a Christmas tree and some typically strange HAROLD & KUMAR-style adventures, including a segue into Claymation and of course an encounter with Neil Patrick Harris.

The very basic premise – guys running around, trying to fix something before the family finds out they’ve messed up – is straight out of a TV sitcom, but the execution is Writers/producers Jon Hurwitz & Hayden Schlossberg, who have scripted all three installments, take so many whacks at the fourth wall that it disintegrates under the onslaught.

Neil Patrick Harris not only gets a huge Broadway musical number, but his current public persona comes in for a meta-hammering (his real-life husband David Burtka shows up as himself in an unexpected way). Penn also gets teased about what he’s been doing for the past few years, and there may even be a STAR TREK gag in there for Cho. There are jokes about 3D, Claymation, remakes and the movie A CHRISTMAS STORY, which gets sent up in a way that few other films would dare. There is also a running gag about a toddler (played by the adorable Cross triplets) who inadvertently comes into contact with a wide variety of recreational narcotics. The little girl in the movie never seems anything less than delighted, so the young actresses were never urged to show distress, but this is likely to make some viewers squirm, even if they’re immune to or amused by the film’s other outrageous elements.

It must be said, even by someone who isn’t a fan of 3D, that director Todd Strauss-Schulson makes great use of the format, sending totally silly props and other things sailing right out over the audience whenever it may get a laugh. The effects are also done right, so that at times it really looks as though a giant candy cane is hovering directly above the head of a woman sitting four rows down.

Viewers who are fans of the first two films will probably get a warm, comfy feeling from the humor and the camaraderie, to say nothing of the unabashed adoration of marijuana (you don’t have to toke to be in on the joke).  Oddly, the hallucinatory effect is more reminiscent of LSD, one of the few illicit substances not represented here, than of pot (the number one drug of choice in the H&K series), cocaine or alcohol. Watching Cho and Penn riff off one another – with Harold uptight but somehow still cool and Kumar bemused and even cooler – is enough to induce a Zen-like state of contentment, and Harris adds a blast of glorious craziness.

These guys are so adroitly funny and have such palpable goodwill between them (even when the characters aren’t getting along) that it’s hard to shake a sense of well-being while they’re onscreen together. In its own patently cockeyed and determinedly impious way, A VERY HAROLD & KUMAR 3D CHRISTMAS embraces the fellowship of the holiday spirit. It’s friendly and also impossibly ridiculous.