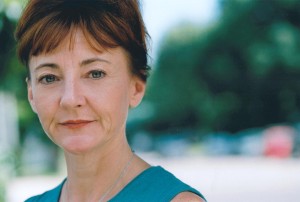 On CHUCK, the Josh Schwartz/Chris Fedak-created NBC series that has its Season Four finale tonight at 8 PM and will be back for Season Five, the title character (Zachary Levi) is an electronics store employee turned super-spy, thanks to a ton of arcane information downloaded into his brain. His team consists of actual super-spies Sara (Yvonne Strahovski), who is now also Chuck’s love, and John Casey (Adam Baldwin), plus Chuck’s nerdy best friend Morgan (Joshua Gomez). They all take their orders from General Diane Beckman, played by Bonita Friedericy, the exceedingly stern but often compassionate authority figure who gives them their missions each week.

In person, one sees just how unlike the warm, funny, cat-loving Friedericy is from her steely character on CHUCK. The actress, raised in Pasadena, California, gives us this exclusive briefing on all things Beckman in Part 1 of our interview.

ASSIGNMENT X: It was just announced a few days ago that CHUCK was picked up for Season Five. Were you expecting this?

BONITA FRIEDERICY: No, nobody was. Well, [executive producer/episode director] Robbie [Duncan McNeill] seemed to be. NBC just announced its fall schedule, and CHUCK is going to be on Fridays at 8. Everybody acts like Friday at 8 is a death slot, but I’m not so sure – at least it’s not that horribly competitive spot on Mondays at 8. I think our fans will watch it Fridays at 8. I’m home on Fridays.

AX: Did you always want to be an actress?

FRIEDERICY: Sort of, yes. You know when you’re a little kid and the eternal question is, what do you want to be when you grow up? My first response was, I want to be a nice person, which I have always felt to be an odd response. I’m not quite sure I’ve ever achieved it [laughs], but that’s what my mother trained me to aspire to be a nice person. I grew up in a family of artists, except for my father, and so my brother was a puppeteer, so we used to make puppets. I didn’t make good puppets, because I was younger than everyone else and I was not as artistic as they were, but we did puppet shows from the time I was about four years old. Actually, we used to do little plays in my house and I always had to play the princess or whatnot – we would do JACK AND THE BEANSTALK or one of these plays. My brother would play the evil witch, and my sister would have to play the prince and I would play the princess and I would be kidnapped by monsters and I was a little kid and I was bored my sister would yell at me. So I would say, yes, I always knew I was going to be an actress.

AX: However, you were a teacher for awhile. What made you decide to take the leap from being a teacher to being an actress?

FRIEDERICY: The money. And also, my sister saying rather rudely to me that she wouldn’t want me teaching my nephews [laughs]. She’s a blunt one, that sister of mine. I was thirty-five or thirty-six, and [joking] considering I’m like thirty-eight now –

FRIEDERICY: Isn’t that amazing? I have a gift, what can I say? But it was when I was thirty-five or thirty-six, I had been teaching pretty more or less full-time at one school while doing theatre, and I was directing plays, and I was acting in plays, and I was trying to decide whether I should go back to school, so I could become a real teacher, and the thought of going back to school just did not sit well with me. So I decided that I would rather try to make money with [film and television] acting than go back to school.

AX: How did you become involved with CHUCK?

FRIEDERICY: In fact, I was not the original General Beckman. When I auditioned,  I walked into a room with Josh [Schwartz] and Chris [Fedak] and a bunch of other people – Patrick Rush, the casting director, and Todd Sherry – I knew them from before and I love them. There was a chair in front of the camera, and I said, “Do you guys want me to do this sitting down?” And somebody, and I don’t know who it was, said, “You’re a general. Don’t you think you should make that decision?” Which of course made me really embarrassed and made me start mumbling, and I went, “Oh, right.” And I picked up the chair and I moved it and someone went, “Well, now it’s blocking the fire escape.” [laughs] By which time, I was a mess. So I tried to do the scene and I vaguely recall shouting, and someone looked at me and said, “Really? You really think a general would shout at people?” Which I would, but I reined myself in and I did my audition and they seemed to quite love it.

Then Wendy Makkena walked in and Wendy Makkena was about the same size and shape as I was, but apparently is known for her ballsy auditions, and may have exuded more of the basic general-ness and they went back and forth for quite awhile, apparently, between the two of us, and finally settled on her. And through a series of events, [Makkena plays Beckman in the pilot but not subsequently], they went back to me. When I went to the screening of the pilot, many people complimented me on my performance [laughs]. It was like, “Thanks, that wasn’t me, but woo-hoo!”

AZ: When you first joined CHUCK in first season, you had an opposite number played by Tony Todd, who is extremely tall. You are fairly petite.

FRIEDERICY: Yes. I’m working on a show right now where everyone except Josh Gomez is light years taller than me. I’m a Yoda. Yoda Beckman is what I would like to be called. I’m a sage old woman. Adam Baldwin – I think it was the first season, he was looking at me, and God bless him for this, it was a sweet look, he goes, “I’m the most senior [in age] person in the cast,” and I said, “No, you’re not, Adam, I am.” I outstrip him by a couple years. Again, this is a tall show we’re talking about here, and yes, I was working opposite the Candyman.

There was some thought that we would also be antagonistic, because he was CIA, I was NSA, although that is now blurred. They were sticking me on top of strange cushions. I had phone books beneath my feet and I would sit on five cushions. After the pilot, we ended up being in Beckman’s office, never in Tony Todd’s office. So [for both actors to be in frame] he always had to lean on my desk [and] I would sit on five cushions. It’s really hard to be a kickass general when you’re sitting on top of objects that mush and move right to left. So you’re always seeing him hunkered down leaning on the desk because they couldn’t put us both in the same frame at the same time. I do love that, even now. In the episodes with John Larroquette, John Larroquette is also six-foot-five. He’s an extremely tall man. And we had to have an intimate scene with each other and so they put me in five-inch heels and I still came up to [his chest].

FRIEDERICY: Yeah. Chris Fedak, I think, had an intense fondness for the character of General Beckman. I think he’s very proud of himself for having conceived this character, for which I thank him profusely. And apparently the writers’ room was very much in love with the idea that John Larroquette, in the first episode [he appeared in], would round the corner and see me on the [computer monitor] screen and do this [seductive voice], “Hello, Diane.” And they were all doing impressions of it. They would walk on set and go, “Hello, Diane.” They were all very fond of that moment.

AX: So they embellished on that when John Larroquette came back this season …

FRIEDERICY: Well, I actually did have scenes [with Larroquette, as opposed to appearing only on the computer monitor]. When I’ve actually had physical scenes with people. I relished the interaction. This episode was directed by Patrick Morris, who is wonderful. Everybody loves him and he’s really fast, so at best, one probably has two or three takes of a scene, but John Larroquette’s such a good actor. He’s just marvelous. What a joy, what a pleasure to work with someone like that. So I had a lot of fun.

AX: You got to fire a rocket launcher in that episode …

FRIEDERICY: I fired my own rocket launcher – well, frankly, it was a rocket launcher that didn’t really fire, much to my chagrin. I didn’t realize that Kentucky, our prop guy, had put an actual [prop] missile in it once so that when you looked down the barrel, you would see a missile, so I made a swift move when I turned around to talk to someone and the missile just flew out of the tube and landed on the ground and it was very embarrassing.