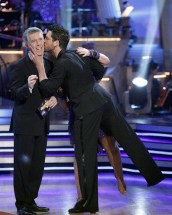 A DANCING WITH THE STARS miracle will have to happen tomorrow night for Ralph Macchio to escape elimination, yet again! He brought his sexy mojo – pimp style – to the dance floor and the judges rejected him! So, the semi finals are over, the votes are tallying in and soon we will know who will be in the DANCING WITH THE STARS Season 12 finals.  Two dances were done tonight plus a Cha Cha Cha winner takes all, which Chelsea Kane won, grabbing her an additional 15 judges’ points! The season is coming to an end. Unless a huge upset occurs it will be the Disney star versus the football player competing for the mirror trophy next week.

Chelsea Kane (Disney Channel Star) and her partner Mark Ballas
She danced the Argentine Tango nicely but she seems better suited for the spunky dances. Carrie Ann Inaba thought it wasn’t up to par. Len Goodman, too, thought it lacked a bit of authority. Bruno Tonioli LOVED IT!!!
Scores: Inaba – 9, Goodman – 9, Tonioli – 10, PH – 9

Kane’s Rumba was sleek and sultry. The judges were pleased. Inaba said it was full of emotion. Goodman loved how expressive Kane was in her movements. Tonioli thought it was perfectly pitched.
Scores: Inaba – 10, Goodman – 10, Tonioli – 10, PH – 8
Total – 58 + 15 bonus points form the Cha Cha Cha Winner Takes All =73

Hines Ward (Football Star) and his partner Kym Johnson
Ward’s Argentine Tango was a bit jolting. However, the judges seem to think he can do no wrong. Goodman exclaimed, “I was there!” Tonioli said it was like good sex. Inaba thought the connection between Ward and his partner Kym Johnson was just beyond anything she has seen.
Scores: Inaba – 10, Goodman – 10, Tonioli – 10, PH – 9

Ward’s Salsa was a shimmy-shaking machine. Goodman said it was steaming. Tonioli thought it was just beautiful. Inaba expressed how much she enjoys watching him dance.
Scores: Inaba –10, Goodman – 10, Tonioli – 10, PH – 9
Total – 60

Ralph Macchio (Actor) and his partner Karina Smirnoff
It was clean, it was sharp, but sadly it may not be enough. Goodman thought it was full of content. Inaba said Macchio needed to take that expression from his face and put it to good use in his feet. Tonioli said it was too flat.
Scores: Inaba – 8, Goodman – 9, Tonioli – 8, PH – 9

Macchio’s Salsa didn’t fare any better. He certainly got the shaking part down that the judges have been begging for all season. However, they were not impressed.  Goodman thought there was no rhythm. Inaba oddly liked it, but Tonioli thought it was too rough.
Scores: Inaba – 8, Goodman – 7, Tonioli – 8, PH – 9
Total – 48

Her technique has improved tenfold. Alley’s Paso Doble was very tight. Tonioli said she was from Dance Trek 12: The Wrath of Kirstie! Inaba stated her to be the queen of the Paso Doble. Goodman thought it was fabulous.
Scores: Inaba – 9, Goodman – 9, Tonioli – 9, PH – 8
Total – 54

Who’s going home? It will be a miracle, yet again, if Macchio isn’t sent packing. Sadly, the fans’ votes may not be able to pull him through this time.

Who has the legs to take home the mirror ball? It’s a tight race between Ward and Kane, but Ward looks to be the one to beat! Stay tuned!

UPDATE: Who was eliminated – CLICK HERE to find out