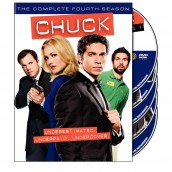 The good, the bad and the ugly of a massive (and often times uneven) 24-episode season

It’s hard to hate CHUCK, even when it sometimes veers wildly off course. Yet, when all is said and done, CHUCK – THE COMPLETE FOURTH SEASON still provided some pretty great episodes during a massive (and occasionally uneven) 24-episode season.

Season 4 gets off to a rocky start with Chuck (Zachary Levi) and Sarah (Yvonne Strahovski) constantly having relationship woes as they deal with their forthcoming wedding. This is where the show is its most infuriating because it tries to shoehorn a theme about their relationship into what’s going on with a mission and many times it doesn’t work.

The problem is some of the magic sheen of their romance is wilted and this constant back and forth bickering (over really ridiculous things) feels false – something the show has avoided pretty much up until now.

That said, things get a nice jolt with the appearance of Linda Hamilton as Mom Bartowski – she’s one of the most welcome additions to the cast as is Alexei Volkoff (played by former James Bond Timothy Dalton). There’s also the appearance of Volkoff’s long-lost daughter Vivian (Lauren Cohan) who brings some new twists in the latter half of the season too.

There’s an on-going mystery of who “Agent X” is on the show, plus there’s the return of Sarah’s dad (Gary Cole) and some secret goings on with Casey (Adam Baldwin).

Standout episodes include the hilarious Halloween episode “Vs. The Fear of Death” featuring Robert England as well as “Vs. the C.A.T. Squad” which puts showcases Sarah’s previous -type team of hot CIA girls.

It’s hard to sustain a series like CHUCK for 24 episodes, especially since it had to build and create its arcs in half season intervals due to NBC’s reluctance to give it full season orders out of the gate.

That’s why calling Season 5 its final season (and at only 13 episodes) is such a pile of crap. CHUCK has proven time again to be one of the steadiest players on NBC’s schedule as all its other show continually languish in the bottom of the ratings. Advertisers also love the show. You’d think they would show it a little more love.

That said, when they call this the fifth and final season with only 13 episodes and with NBC’s schedule once again in the crapper, I highly doubt the show will stop at 13 this year. Expect a full season order pretty quickly.

The special features on Season 4 are the usual grab bag of goodies. There’s a five episode mini-sode saga called BUY HARD: THE JEFF AND LESTER STORY that’s pretty funny (there’s one ep per disc). There’s a bunch of deleted scenes and a featurette showing Levi directing (it’s actually one of the better making of features I’ve seen).

There’s also a nice little gag reel too – showing off how adorable Strahovski is (and silly too – something we don’t get enough of on CHUCK).

Unfortunately “Spying on the CHUCK Cast – Operation Gomez) is not as funny as it should be. It’s too scripted and forced, and not natural enough. Wish this was better, though Gomez does a bang-up job with the limited material and it’s always nice seeing him getting the spotlight.

CHUCK is yet again a lesson in patience and fan loyalty. It’s a show that has survived because of the fans and also thrived because everything else on the NBC network is a mess. It would have been nice if it could have turned into a bonafide hit, but I do have to say, that with five seasons (and the numerous amount of cool guest stars and subplots), it’s been a nice little ride. Deep down, CHUCK fans are all hoping this “last season” business turns into an additional season (much like what happened with SMALLVILLE when it landed on Friday nights a few years ago). The show’s last season turned into a couple of extra years, so anything is possible.