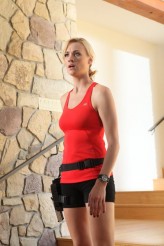 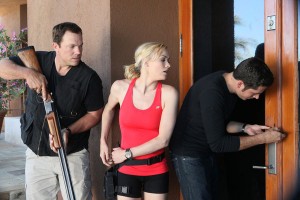 There is hope for this new, horrible, turn CHUCK has taken, namely that of Morgan Grimes (Joshua Gomez) as the Intersect – the CIA/NSA database of bad guys, etc., that had formerly been downloaded into Chuck (Zachary Levi). It does not come until the end of this utterly dreary episode, but it is a glimmer of hope.

Until then, Morgan is not handling the download of the Intersect very well, and Chuck, with his long history of Morgan as his only friend, is too nice to hit Morgan over the head and tell him to cut it out, already. In the meantime, the team is hired to rescue the brother of an international thief and thug, who has been kidnapped.

They are also facing stiff competition in the private security business from Gertrude Verbanski (Carrie-Anne Moss), a former KGB operative with an extremely slick operation and quite possibly a thing for Chuck’s partner Casey (Adam Baldwin).

On the Buy More front, Big Mike (Mark Christopher Lawrence) wants his assistant manager job back and comes up with an idea to get business for the now-empty store.

But the biggest plot issue is Morgan, who is running off half-cocked on a regular basis and Chuck’s complete inability to control him. Not to mention how paranoid Morgan is getting.

I’m going to try and give the writers the benefit of the doubt here because, given the twist at the end (which will not be described because this is a no spoiler zone), it looks like there could be some interesting turns, including Chuck getting the Intersect back. Now, I get that the Intersect can’t be the focal point of the show anymore because that would be boring – especially since Chuck has gotten pretty competent as a spy even without it. So naturally, there needs to be a new complication to add drama.

But giving the Intersect to Morgan was not a good idea. The character just can’t carry that kind of interest or depth, despite actor Joshua Gomez’s best effort. And we’ve seen Gomez go to some of those places in the series, so it’s not him. It’s the writing. And it’s not like Chuck and Sarah dealing with being newlyweds and having to run a private security company isn’t enough complication.

So, I’ll hold out hope for the time being. This has been a good show. The writers are working toward the finale and presumably know how they’re going to get there. So hopefully, this is just some transitional awkwardness on the way to a really whiz-bang satisfying series end. Because after this episode, hope is all I’ve got.