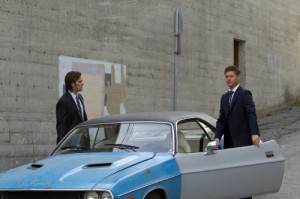 Time for a little shout-out to the Los Angeles theatre scene. THE THRILLING ADVENTURE HOUR (aka THE THRILLING ADVENTURE AND SUPERNATURAL SUSPENSE HOUR) is a stage parody of ‘40s radio series that has been running once a month for years now, lately at Largo at the Coronet on La Cienega. One of THRILLING’s staples is “Beyond Belief,” a send-up of THE THIN MAN in which perpetually inebriated mediums Frank and Sadie Doyle (the latter played by CRIMINAL MINDS’ Paget Brewster) face down a variety of ghosts and monsters.

What, you may ask, does this have to do with SUPERNATURAL? THRILLING creators Ben Acker & Ben Blacker joined the SUPERNATURAL writing staff this season and “The Mentalists” is their first credited script on the show. Fittingly enough, it deals with mediums, both real and fake, in the town of Lily Vale, NY. After the deaths of two local professional spirit communicators hit the national news, Dean (Jensen Ackles) arrives to investigate and finds Sam (Jared Padalecki) already on the scene.

Despite Sam’s continuing anger at Dean for lying to him about Dean killing Sam’s people-eating friend Amy, the two brothers work together. They discover the culprit is the angry ghost of an actual medium whose more charismatic sister fronted for her during their stage career. The ghost is being abetted by a psychic memorabilia store proprietor (Johnny Sneed) who is likewise irate that he can’t make a living on his real psychic talents, while more photogenic frauds are stealing the limelight. In the midst of the investigation, a moderately psychic museum curator gives Dean a message from deceased old friend Ellen, who more or less orders Dean to put things right with Sam. When Sam has (unhappily) killed the angry store owner and Dean has gotten rid of the ghost, the siblings have it out, with Dean talking about his trust issues and Sam worried that Dean’s stress and alcoholism are impairing his judgment. More or less back on an even keel, the Winchesters drive on down the road.

Anything that gets Sam and Dean to stop sulking at each other for any amount of time is a good thing. The ghost is actually somewhat creepy and the dialogue is enjoyably snappy, as should be expected from Acker & Blacker, with extra points for name-checking the Orb of Thesula (given Sam’s detachable soul, it’s probably a good thing this one turns out to be fake).

“The Mentalists” has a good time with the whole who’s got it, who doesn’t, who’s in between and how much do they have issues in terms of psychic power, with Sam and especially Dean having some nice reactions in various degrees of skepticism, surprise and acceptance. There’s also a good offhand bit of ickiness as far as exactly what has gone down between the ghost and the store owner.

“The Mentalists” has bits of arc mythology woven into it, but mainly it’s just a smart, fun standalone that showcases many of the things that SUPERNATURAL  does well.