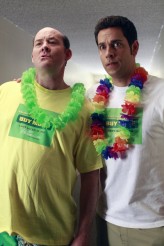 At last, Morgan no longer has the Intersect. Chuck doesn't, either. 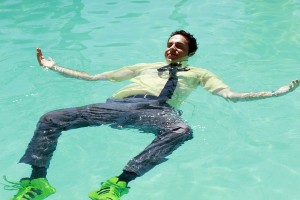 Now, “Vs. The Business Trip” is more like the CHUCK we’ve known and loved all these past five seasons. With a CIA hit put out on Morgan (Joshua Gomez) because he’s been telling everyone he has the Intersect, that CIA database imprinted in the brain that Chuck (Zachary Levi) used to have, General Beckman (Bonita Friedericy) comes and takes it away. End of problem, right?

Chuck and Sarah go back trying to figure out how to be married and lead a normal life while still working as spies for hire. And, sure enough, Beckman wants them back at the Castle, their spy hide-out, immediately. Because bad guy Decker (Richard Burgi) can’t call off The Viper – an assassin that has been never called off until the mission is complete and that has never failed a mission. Because the thing is, Decker still wants Chuck and Sarah (Yvonne Strahovski).

Which means there’s only one thing left to do: lure The Viper out into the open by setting up Chuck as Morgan and sending him to the Buy More corporate sales recognition weekend in Riverside (and if you live in Southern California, you get that joke). This is one of those bacchanalia supposedly for the top sales person from each store. Free drinks, skinny dipping, the works.

And they do inspire a hit on Morgan (we mean Chuck) and take the bad guy in. But do they, in fact, have The Viper? Are you kidding? This happens way too early in the episode for that. Suffice it to say that things boil along nicely to one heck of a cliff-hanger and we are advised that Chuck will not be airing again until December 9. Which reminds us, NBC also announced this week that Chuck’s two-hour finale has been scheduled for January 27.

Even without the Intersect, Chuck is functioning fairly decently, which is nice and adds a new wrinkle to the show that’s a lot easier to deal with. Morgan is now back to the supporting role the character deserves. Gomez’ chops, notwithstanding, the character just couldn’t cut it as the focal point of the show. And when the show is based on the adventure along with the relationships, it works really nicely. And this episode definitely has the right balance back.