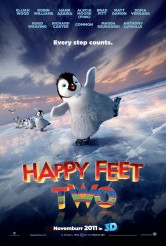 The original 2006 HAPPY FEET had the amusement factor of singing and dancing penguins, along with a nice ecological message. Some people objected to that message served with the music, so HAPPY FEET TWO has drastically scaled back on its observations about the havoc humans are wreaking across the planet. Without being in the writers’ room for the film, it’s impossible to say whether there’s a cause and effect here, but the new film has also cut way down on plot, so that every section feels like it goes on forever without much forward movement. There is also much more emphasis on young characters, who seem designed to appeal to the preschool crowd. The result is beautifully animated and intermittently entertaining, but often enervating.

Mumble (voiced by Elijah Wood), the Emperor penguin who stunned his flock by dancing, is now a pillar of the penguin community. Everyone in Mumble’s group now dances – except Mumble’s young son Erik (voiced by Ava Acres), who doesn’t feel he can do anything right. When Adelaide penguin Ramon (voiced by Robin Williams) wants to go back to his own flock, Erik and two other kids follow him. The Adelaides have recently adopted Sven (voiced by Hank Azaria), a puffin who is wrongly assumed to be a flying penguin. Mumble retrieves the children, stops to rescue an elephant seal (voiced by Richard Carter), then gets back to Emperor-land just as an ice-quake traps most of the penguins in a newly made valley. Can Mumble or Erik or anyone save the flock? This is crosscut with the adventures of an ambitious krill (a tiny crustacean that commonly travels in huge swarms) named Will (voiced by Brad Pitt) and his more timid friend Bill (voiced by Matt Damon).

The spectacle of masses of penguins – and sometimes other creatures – doing production numbers is technically impressive and kind of cute, but it’s not enough to make a whole film. The numbers chosen here also don’t make us laugh in startled appreciation, even with lyrics adapted to suit the situation. When little Erik chastises the elephant seal in an operatic aria, it’s too on the nose (and long) to be dramatic, and too determinedly serious to be funny. Further, unlike the original film, where our hero Mumble had his own special ability that set him apart, Erik isn’t good at anything for a long time and simply feels sorry for himself. Granted, some kids don’t excel in any area and need help and encouragement, but this doesn’t mean they are necessarily great focal points for movies, especially when the movie doesn’t have any particular insights on how the parents of these kids ought to emotionally support their offspring. The result is the uncomfortable sense of earnestness without any deep content to be earnest about.

It’s also disconcerting, albeit likely unintentional, that Sven the puffin’s face looks a great deal like that of the Jigsaw puppet from the SAW films. We half-expect the bird to ask if anyone wants to play a game. Granted, we can hope that the vast majority of the HAPPY FEET TWO audience won’t be familiar with SAW, but Sven’s existence does bring up something that seems muddled. Other penguins aspire to fly because they see Sven doing it while they think he’s a fellow penguin. Are we being told that we shouldn’t aspire to do anything we’re not born to do, or that we should intensely scrutinize the differences between ourselves and strangers? This seems controversial, and perhaps not what we’re meant to derive from all this, but it’s hard to figure out more positive interpretations of the scenario.

Then again, it’s easy to interpret the laudable points about working together for a good cause, paying one’s debts and not losing hope. There is a lot of artistry in the crowd sequences, with penguin fluff blowing realistically in the Antarctic wind and the rhythmic slap of flippers providing a nice percussive beat. The 3D, while not necessary, is rendered well, which soap bubbles floating over the audience during the end titles that kids (and even some adults) will be tempted to try to touch.

HAPPY FEET TWO is the kind of movie that won’t make you scream in pain while you’re watching it, and that won’t prompt you to remember much about it once it’s over.