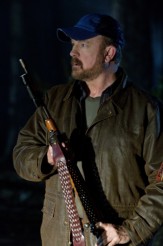 An episode that fits squarely with the optimal mood of the series – serious overall, but with good quips 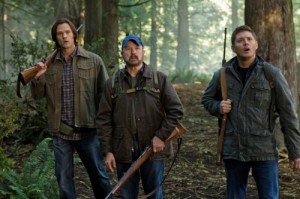 Jared Padalecki, Jim Beaver and Jensen Ackles in SUPERNATURAL - Season 7 - "How to Win Friends and Influence Monsters" | ©2011 The CW/Jack Rowand

After trying a little too hard to be funny for a few episodes, SUPERNATURAL gets back to normal (for this series) with “How to Win Friends and Influence Monsters.” Based on the events of the past few seasons, Dean (Jensen Ackles) is wondering if the world actually wants to destroy itself, Sam (Jared Padalecki) is worried about Dean and Bobby (Jim Beaver) is worried that all Dean and Sam do is worry about each other. Then, of course, they get bigger problems.

In New Jersey, half-eaten human bodies are making headlines. When our team shows up to investigate, the strange behavior of the locals – some seem stoned, some are hyper-aggressive – rouses suspicion. Even more suspicious is what happens to Dean after he samples the turducken sandwich at the town diner. He stops worrying about the apocalypse, the Leviathans, and everything else. All he cares about is getting another sandwich. Sam and Bobby realize there is something not kosher about the sandwiches and find they are exuding unidentifiable blue goo. They also discover that the man-eating creatures used to be human.

When one of the creatures is captured and taken to a poultry processing plant, Sam recognizes Edgar the Leviathan (Benito Martinez). Dr. Gaines (Cameron Bancroft), the Leviathan in the body of a physician, has been conducting experiments to make humans gain weight and become more complacent.

However, Leviathan leader Dick Roman (James Patrick Stuart), who has taken over the form and identity of one of the world’s wealthiest industrialists, is really unhappy that 0.3 percent of the test subjects have turned cannibalistic and attracted media attention. Humans must not believe that monsters exist. Dick forces Dr. Gaines to eat himself (don’t ask) and Bobby gets captured. Because Dick monologues, Dean and Sam have time to run in and dose a lot of Dick’s hench-Leviathans with household cleaning solvent (deadly to the Purgatory refugees) and Bobby has time to steal some maps from Dick’s office. However, Bobby is shot during the team’s escape.

Let us hope Bobby survives. Other human characters who have come and gone have mostly simply added to the general angst, but Bobby provides a unique voice in the SUPERNATURAL universe that the show seems to need on an almost weekly basis to keep it on an even keel (not to mention to keep Sam and Dean from sliding into separate terminal funks). Furthermore, Beaver’s excellent performance would be greatly missed.

The finale aside, “How to Win Friends and Influence Monsters” bounces between X-FILES-style scares, patented SUPERNATURAL humor and some indications of how the Leviathans intend to achieve world conquest. Given what we’ve seen of the Leviathans, not to mention Dick Roman’s clout in the human world, the whole making humans more docile business seems like overkill – the Winchesters and Sheriff Jody aside, the monsters seem perfectly able to eat whoever they want already – but maybe they’re in a hurry for some reason. Stay tuned. Ackles makes Dean’s foray into cheerful apathy pretty funny and the effects of the toxic sandwiches on the townspeople are pretty amusing, especially in a sequence with a diner waiter who is reaching his breaking point.

It’s refreshing to see Sam and Bobby almost immediately conclude that Dean’s condition is unnatural and requires attention. (Unlike, say, last week, where Dean recognized that Sam was bespelled and then did almost nothing about it for the rest of the episode.) In the bigger picture, we seem to be waiting for the other shoe to drop in terms of the participation of Crowley(Mark A. Sheppard); since we know he and Leviathan Dick hate each other, it seems likely the current Lord of Hell will enter the fray directly at some point. Meanwhile, we’ve got Sam and Dean on the run and exasperated, which is pretty much SUPERNATURAL’s reason for existence. The use of household cleaner as the ultimate weapon continues to be a good touch – remember, folks, cleanliness is next to Leviathan-less-ness.