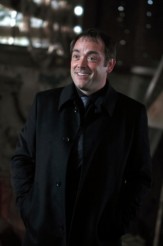 The actor teases that there may be more to his demon, plus BUFFY alum Charisma Carpenter and James Marsters are in the premiere episode 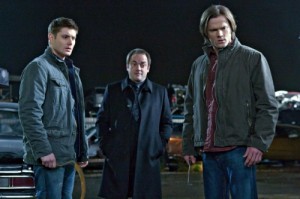 Mark Sheppard is one of television’s reigning kings of returning characters. As CW’s SUPERNATURAL fans know, Sheppard’s character Crowley was also King of Hell for awhile, though he got demoted and then almost smote when angel Castiel (Misha Collins) ascended to godhood in the Season Six finale.

The London-born Sheppard will be back in SUPERNATURAL’s upcoming seventh season and recently returned as Jim Sterling in the summer finale LEVERAGE.

Right now, though, he’s talking about Crowley, who started out as a Crossroads Demon – or did he? The British-born Sheppard has some interesting theories about this – but he’s wary of giving out any spoilers.

AX: But it would be funny – and they occasionally have truly weird stuff on SUPERNATURAL …

SHEPPARD: This week especially. They have James Marsters and Charisma Carpenter [in Vancouver filming guest-star roles] on the [seventh-season premiere] episode.

AX: I think you’re safe in saying that – it’s not a spoiler at this point.

AX: Well, the SUPERNATURAL folks have already announced that Crowley is going to return, presumably as played by Mark Sheppard.

SHEPPARD: There’s actually a shot of me in the Season Seven trailer, so you’re not going to really get away with [hiding] that, are you? 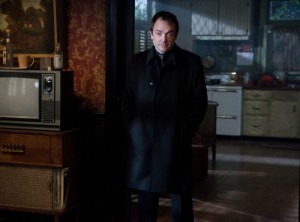 AX: With SUPERNATURAL, were you worried that Crowley would get obliterated at the end of Season Six, since Castiel was pretty much zapping characters here and there and everywhere?

SHEPPARD: The lovely thing about SUPERNATURAL is that you get a phone call. And the phone call is, “You’re dead.” And I did get a “You’re dead” phone call. But I got a, “You’re dead, don’t panic.” [laughs]  “So I’m not on the show?” “No, no, no. Actually, you will be back, and this is when you’ll be back, and this is why.” And I was like, “Okay, that’s cool.” So pretty much any time I have a fun conversation with [show runner] Sera Gamble, it’s like, “You going to kill me yet?” “No, no.” It’s kind of fun. Or I could be dead already. You never know.

AX: Well, Crowley’s a demon. Demons seem to recycle themselves on SUPERNATURAL.

SHEPPARD: Well, that’s the next question. You never see my eyes flash red. How do you know I’m a demon

AX: Well, because everyone says so? They could be lying.

SHEPPARD: They could be lying. That’s the fascinating thing.

AX: But isn’t Crowley described as a crossroads demon?

SHEPPARD: Described. But then my eyes should have flashed red at some point. You go look – there’s nowhere where my eyes flash, ever.