A lively episode that lets Jared Padalecki and Jensen Ackles stretch in dual roles, but never hints at going where the title suggests it might 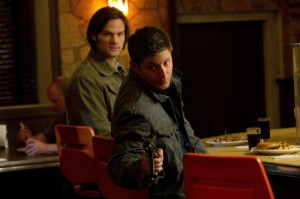 SUPERNATURAL has done some crazy things in its time, but would an episode called “Slash Fiction” really be about what the title implies? For those unfamiliar with the term, “slash fiction” refers to fiction written by fans about a particular TV series or film or book, with the specific premise of that fiction in getting two characters of the same gender together sexually. With SUPERNATURAL, since Sam and Dean are brothers, this has a whole added element. The show runners clearly know about the fiction roaming the Internet and joke about it from time to time (whenever SUPERNATURAL feels like nudging its fourth wall), but as crazy as the series can be, nobody really expects it to go there – and it doesn’t.

The title is partly a play on PULP FICTION and partly a reference to the sword that comes handily into the picture. Bobby (Jim Beaver) is hard at work, trying to figure out how to permanently kill the Leviathan (Sean Owen Roberts) who is now in his basement.

The talky, cocky monster was captured by Sam (Jared Padalecki) and Dean (Jensen Ackles) last week after a helpful spell from a warlock (James Marsters) knocked the creature out for a few days. Sam and Dean are meanwhile grappling with the problem that two other Leviathans, beings that can take on the appearance of any human they’ve had contact with, are currently running around staging mass murders while looking exactly like Sam and Dean. Our guys promptly shoot to the top of the FBI’s Most Wanted list. 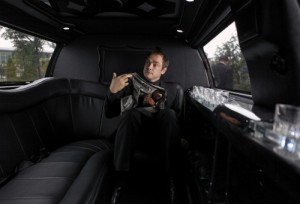 In the midst of all this, demon Crowley (Mark A. Sheppard), now lord of Hell again, tries to forge an alliance with the chief Leviathan, who calls himself Richard Roman (John Patrick Stuart). However, Leviathans despise demons and Roman openly wants nothing to do with Crowley.

Bobby discovers that decapitating his captive Leviathan works temporarily. Bobby receives a very friendly visit from Sheriff Jody Mills (Kim Rhodes), who is grateful to Bobby for saving her from the Leviathans a few episodes back. Jody decides to give Bobby’s house a good cleaning and inadvertently discovers that Borax melts Leviathans (in real life, it kills flea larvae in carpets, so it truly is an heroic substance).

The real Sam and Dean get arrested, but Bobby is able to get the information to Dean during the prisoner’s one phone call. Due to sloppy eating habits by the Leviathans, Dean is able to convince his jailer to help kill fake Sam and let Dean out. Dean then vanquishes fake Dean – but, unfortunately, not before fake Dean has told real Sam that real Dean killed Sam’s nonhuman friend Amy (Jewel Staite). The episode ends with Sam deciding he needs some time away from Dean.

Yes, because splitting up due to hurt feelings in the middle of a possibly world-destroying crisis is always a good plan. This is an aspect of SUPERNATURAL that makes viewers – even many loyal fans – want to bang their heads against the TV screen. Don’t Sam and Dean ever learn anything about what happens when they go their separate ways? Doesn’t each have a pretty good notion of what the other is like by now? Isn’t there some limit on how much they can sulk? Won’t anybody realize how old this is dynamic within this story?

Still, the PULP FICTION vibe is handled pretty deftly, as far as Quentin Tarantino’s style can be played with on broadcast television. It’s a nice tone change for SUPERNATURAL that keeps things lively and nasty in a new way.

Having Padalecki and Ackles play two people who aren’t really Sam and Dean brings out the best in both. Padalecki is especially adept at this – a few seconds into the episode’s opening scene, before he says a word, the look on Padalecki’s face tells us this isn’t Sam Winchester. Ackles makes his Leviathan a bit of a Bond villain monster, since frankly, a simply snarky monster would be too close to regular Dean.

So far, there doesn’t seem to be such a thing as too much Beaver as Bobby. He gets some great lines here, including his unhappy observation on how much the Leviathan knows: “Just what we need – a MENSA monster.” Sheppard is similarly welcome as Crowley, who may yet team up with the Winchesters now that his partnership offer has been so rudely rejected by the Leviathans.

The script is shrewd (within the suspension of disbelief that the overall series requires) in how it gets Sam and Dean out of law enforcement scrutiny by the episode’s end (they’re once more presumed dead) and in showing us the Leviathan decision not to re-clone our heroes.

“Slash Fiction” is a good-enough episode. However, the title is misleading, which will be a huge relief for some and a disappointment for others.