TV Review: THE WALKING DEAD – Season 2 – “Save the Last One” 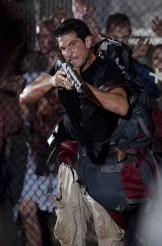 TV Review: THE WALKING DEAD – Season 2 – “Save the Last One”

Shane makes a choice in a tense, surprising third episode 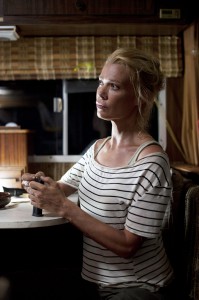 In the third episode of THE WALKING DEAD Season 2, “Save the Last One,” Shane (Jon Bernthal) and Otis (Pruitt Taylor Vince) are trapped by a horde of zombies, unable to return to Herschel’s (Scott Wilson) farm with the much-needed medical supplies that might save Carl’s (Chandler Riggs) life. While time runs out for the boy and his suffering parents Rick (Andrew Lincoln) and Lori (Sarah Wayne Callies), Daryl (Norman Reedus) and Andrea (Laurie Holden) may be finding common ground while searching for the still lost member of their party, Sophia (Madison Lintz). And when it comes down to the wire, will Shane make a choice that might haunt him for a long time to come?

Shaving is always so symbolic in film and television, often serving to indicate a character’s traumatic break with reality or an attempt to wash away some sort of sin. Both of these might be relevant as the episode opens with a flash-forward of Shane shaving his entire head. What will prompt him to do this? The answer comes in the shocking final moments of this episode, and it’s one of the most intense and fascinating scenes in the series to date, bringing up all sorts of questions of morality when survival – not just for yourself but for those you love – is paramount.

But is it paramount for everyone? Lori voices one of the show’s darker themes by suggesting that “maybe this isn’t a world for children anymore.” Could Carl be better off dead in a world where survival just means more suffering and a never-ending existence of Hell on Earth? Could any of them? Considering Andrea’s desire to die, an issue still hanging between her and Dale, a growing plot thread could focus on whether the struggle to survive is even worth the effort. Where do they expect to go, and how much of a world could they ever hope to rebuild? Appropriately enough, it’s Rick that steps up later in the episode to establish the show’s message – survival, and life, are always important. Hope is the only option. But Shane might have found a different way there…

There’s a return to some atmospheric and exciting zombie action amid all the deeper explorations of character, but is it about time we retitle this series THE JOGGING DEAD? While it’s true a few Romero zombies occasionally got up to quite a clip while pursuing a victim, there does seem to be a deliberate stylistic shift here in depicting faster zombies than last year, which just doesn’t feel quite right. Once you establish your universe and set your level of reality, you need to adhere to it. This show seems to be changing its rules, and speed is just one of them. So far though, this is just a minor quibble.

Back at the farm – how’s that for a cliché – we see the glimmers of a relationship budding between Glenn (Steven Yeun) and Maggie (Lauren Cohan), something that comic book fans might appreciate. And while Andrea and Daryl manage to have a brief meeting of minds, Dale (Jeffrey DeMunn) takes a positive step away from his manipulative tendencies to give Andrea back her gun and ask for forgiveness. The jury’s still out on that for now, however.

A last-minute arrival to save the day feels a little too convenient, but that’s what TV is all about, isn’t it? Never mind about that, because the finale will have people talking until next week. I think there will be viewers that will consider this Shane’s turn back to a darker personality, but I disagree. Otis was a stranger, he precipitated Carl’s life-threatening circumstances, and Shane’s rage as well as his immediate need to survive and save Carl’s life made the decision pretty obvious. Perhaps he could have been more merciful, but I don’t know. What do you think?

Next week, with Carl out of the woods – figuratively as well as literally – Shane will wrestle with the ramifications of his choice and ask Lori to clarify her heartfelt request for him to “stay” while Herschel puts his foot down.