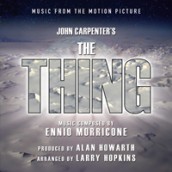 No, we’re not talking about a stillborn prequel here, but the one and only. Jack-of-all-trades filmmaker John Carpenter had served as a writer-director-composer on all of his films until his first studio production of THE THING. It was a bigger budget that allowed Carpenter to get his composing idol Ennio Morricone to provide the director with his first “real” orchestral score.

That didn’t mean that Carpenter and his “in association” collaborator Alan Howarth wouldn’t give THE THING’s soundtrack more teeth by sweetening it with the icily sharp electronics that marked the auteur’s distinctive brand of horror. The result was a fusion of mournful symphonic passages and menacing synth beat-drones that’s marked Varese Sarabande’s soundtrack for nearly thirty years. But for this cult film’s diehard fans, the choice Carpenter-Howarth synths that accompanied Rob Bottin’s freak-o makeup highlights have been sorely missing. Now a monster that keeps taking on new DNA with every wonderfully disgusting transformation fittingly gets a complete re-score on Buysoundtrax, courtesy of Alan Howarth himself.

THE THING’s electronic heartbeat and ever-swelling synth organs are as iconic to 80’s horror scoring as Michael Oldfield’s tubular bells were to 1970’s musical fear, but where you could say that malefic percussion had an upbeat quality that signaled THE EXORCIST’s demon would be vanquished, Morricone’s main THING theme is suffused with a mesmerizing, downbeat tone that tells us no one will come to a happy end. Morricone’s passages are replete with the shivering realization of doom and noble resignation.

Trembling, overlapping strings, lonely pianos and shrill brass make for tone poems of isolated dread. And while violins and organs provide suspenseful rhythms, there’s no action music here, or even “terror” music as such. Rather, John Carpenter instead chose to play the discovery and aftermath of the creature’s assimilations. What accounts for far more music than is actually heard in the film is that Morricone wrote THE THING to fit his perception of the story, rather than its actual picture. In choosing the relatively brief, and subtle amount of score he’d use, Carpenter’s musical economy undeniably adds to the soundtrack’s overwhelming creep factor. And while Morricone bent his own trademarked style of overlapping strings to assimilate into Carpenter’s electronic mode, there’s no mistaking the original synth sound of the director and Howarth, evil, razor-sharp droning that stands in for THE THING’s sci-fi element- the feel of a cold, organically calculated intelligence piercing through the halls of a doomed Antarctic base.

THE THING’s fearful chill is given a powerfully new, and pulsating life by Howarth that’s mostly identical to the original, while done with a verve and enthusiasm that makes it anything but a rote carbon copy. Where Howarth doesn’t have the benefit of replicating Morricone with an actual orchestra, his string emulations mostly do the job. And even when some are a bit wonky, their mutated sample quality only adds to the album’s unsettling pleasures.

As for the synth elements, Howarth is spot-on at creating the classic, and long-desired Carpenter touch, as most popularly heard during THE THING’s spaceship arrival and dog-creature reveal. Genre soundtrack specialist Randall D. Larson is also on hand to document THE THING’s unique musical history in his liner notes. Where many re-performances are to be dreaded (let alone unnecessary prequels), this freshly minted THING album is a notable case of cold tentacles and a warm musical heart.