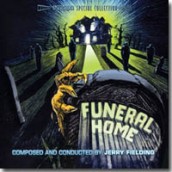 Though best known for giving a dark, psychological edge to the violent western stylings of Sam Peckinpah’s THE WILD BUNCH, Jerry Fielding’s twisted talent for combining dissonance and melody was equally effective in enclosed spaces, whether said abodes were being besieged by English rednecks (STRAW DOGS), a deviant handyman (THE NIGHTCOMERS) or a crazed computer (DEMON SEED).

Fielding’s constant, mesmerizing sense of unease would ironically climax inside the FUNERAL HOME, an independent Canadian horror flick that proved to hold the composer’s last score.  Where a musician with Fielding’s studio resume would’ve turned their nose at being reduced to a PSYCHO-influenced “slasher” film, FUNERAL HOME is a surprisingly polished in its production values, as well as being a top-drawer example of Fielding’s undulating, psychological menace- and far more overt scares at that.

As Fielding ventures inside of a parlor being given a decidedly unwise make-over as a bed and breakfast, Fielding’s slithering orchestra has a thoroughly unsettling playfulness to it, like murder as heard through the uncomprehending ears of an unbalanced loved one, which just might be what’s stalking the death-filled corridors.

Varying between a chamber approach, bell percussion and roaring symphonic terror, Fielding’s approach (as always in this kind of domicile) is just about as modernistic as horror scoring gets, without falling into the trap door of outright dissonance for its own sake.

Foreboding, and strangely emotional at the same time, FUNERAL HOME proved an thematically apt musical headstone for a composer famed for his uncompromising approach to dramatic thrillers. Rescued from Canada by Intrada and given sadly revealing liner notes by Fielding expert Nick Redman, FUNERAL HOME goes beyond being a scoring obscurity to becoming a twisted revelation in Fielding’s nihilistic cannon, right down to an organ piping “Rock of Ages.”

Clink on the link to buy the FUNERAL HOME soundtrack