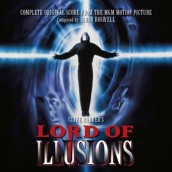 Having done standout, and distinctly offbeat synth-centric work for such twisted auteurs as Dario Argento (PHENOMENA), Alejandro Jodorowsky (SANTA SANGRE) and Richard Stanley (DUST DEVIL), Simon Boswell would ironically compose one of his most symphonically straightforward horror scores for Clive Barker’s unnerving, oddball take on Chris Angel, as ruled over by a Manson Family-esque demigod.

With the English composer given a new Hollywood presence at the time of LORD’s 1995 release (a year that almost marked his noteworthy, if more rhythmically fun studio score to HACKERS), Boswell showed he could certainly bend the traditional orchestral tableau to his warped desired, turning strings and percussion into shrieking, stabbing and poundingly blunt instruments that work over our senses with the same visceral glee as any of Barker’s cinematic torture chambers.

Equally happy in his goals to melodically please and sonically assault, Simon Boswell’s ILLUSIONS score is fully resplendent on this Perseverance release, with a whole other CD devoted to its score in demo form, as well as a glossy liner note package with neat plans for the film’s death-dealing devices – if you’d want to give building them a shot while this riveting, unholy musical accompaniment plays in the background.

Clink on the link: to buy the LORD OF ILLUSIONS soundtrack