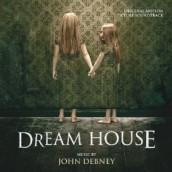 John Debney's musical visit is as emotional as it is scary

It’s been a while since John Debney got to score a body count thriller after the savage likes of I KNOW WHAT YOU DID LAST SUMMER, END OF DAYS and THE RELIC, as well as the more beatific spirit of the underrated DRAGONFLY. Now as he enters a DREAM HOUSE that holds the spirits of a murdered family, Debney’s ghost leads with both the heart and raised hair follicles. It’s a nicely measured approach whose musical flooring ranges from the spiritual to the foreboding.

Sorrowful violins, girls’ voices, and plaintive themes all make for a nicely melodic visitation, with even the necessarily eerie strings and pounding suspense refusing to descend into the basement of “horror” music anarchy, especially in a powerful climax that segues from sweeping action to spiritual redemption.

The fact that Debney approaches DREAM HOUSE from this emotional angle, without sacrificing genre thrills, tells you that this is one well-constructed musical spookhouse that’s as concerned with making the heart skip a beat as it is with investing that organ with feeling.

Clink on the link: to buy the DREAM HOUSE soundtrack