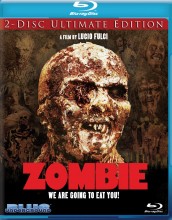 For being such a big horror fan, I have to admit I came a little late to the party in my appreciation of Italian horror master director Lucio Fulci. I knew of his movies, seen pieces of them, but never really sat down to fully embrace the filmmaker’s offbeat sensibilities and knack for unrelentingly disturbing gore.

When it came to Fulci’s 1980 ZOMBIE, it was one of those films I completely overlooked it. In fact, it wasn’t until the last year that I finally saw the film in its entirety.

Now, the film has been completely remastered in high-definition and it looks better than ever.

Storywise, ZOMBIE is a bit of a mess. It was designed as a sort of unofficial sequel to DAWN OF THE DEAD (in some markets it was sold as ZOMBI 2), but aside from zombies being it, there are no other ties to the George A. Romero classic.

ZOMBIE starts off when a ship floats into the New York harbor containing a big, fat zombie who apparently ate the entire crew and was waiting for lunch to arrive once again.

From here, we are introduced to a reporter (Ian McCulloch) who wants to get to the bottom of this. The daughter (Tisa Farrow) who owned this ship wants to know what’s going on as well – so they travel to the Antilles. There, the undead have risen form the ground and are hungry.

The movie’s tagline “We Are Going To Eat You” is legendary, as is the iconic zombie from the poster. The film is just a bunch of set pieces strung together with a somewhat simplistic plot, but it’s Fulci as a filmmaker who approaches things with such zest and glee, you can’t help but being sucked in.

Yes, this is unrated horror that would have earned the movie an X in its time for violence. Yet, even though it’s graphic, it doesn’t reach the uncomfortable ickiness of the SAW or HOSTEL films. There’s elegance and beauty to the gore especially in the wooden beam to the eye gag.

Fulci knew how to make his audience squirm – and this film has endless amounts of squeamish moments.

The widescreen transfer also shows off what a great looking film this is. Sergio Salvati does a wonderful job as director of photography – giving the film a much bigger look and scope that most low budget films would kill for.

ZOMBIE also boasts one of the strangest (and dare I say) hilarious kills in the history of zombie cinema – essentially an underwater zombie attacking a shark.

It has to be seen to be believed.

The disc edition imports many special features over from the DVD release from a few years ago. The new stuff though is extensive including a featurette and intro from filmmaker Guillermo del Toro talking about how this is one of his favorite films of all time.

The second disc is packed with interviews with the stars, the screenwriter, the co-producer, the cinematographer and make-up effects people.

This is as good as a it gets for such a little cult item as ZOMBIE.

Sure, nothing can beast DAWN OF THE DEAD when it comes to breaking new ground with zombies, but ZOMBIE also has a completely different look and feel to it. It’s dark, spooky and definitely unpredictable. It also knows how to balance out its ample Italian chick nudity with its optimum gore scenes.

For those who know the movie by poster alone and have never experiences the hoys of Fulci’s gore masterpiece, now’s the time to finally check it out and see what a underrated filmmaker Fulci actually was.