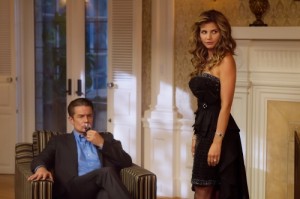 When supernatural shows that are usually dark with hints of humor decide to be lighthearted without committing to going gonzo, the results are usually lightweight. That’s in one way the case with SUPERNATURAL’s episode “Shut Up, Dr. Phil,” but on the other hand, anything that brings together BUFFY and ANGEL alumni James Marsters (Spike) and Charisma Carpenter (Cordelia) automatically has worthwhile qualities.

It’s especially gratifying to see Carpenter and Marsters have scenes together, since although they overlapped on both of Joss Whedon’s vampire shows, they didn’t share the screen often. Here they play married but separated couple Don and Maggie Stark, two prominent residents of Prosperity,Indiana. Sam (Jared Padalecki) and Dean (Jensen Ackles) are here investigating some strange deaths. A little research shows that Maggie is responsible – she’s a witch taking vengeance on everyone around Don for his extramarital fling. Then a freak accident befalls both Maggie’s best friend and Maggie’s painting exhibit, and the Winchesters realize that Don is a warlock.

Dean gets a spell over the phone from Bobby, but because Dean has been drinking a little more heavily than usual, he gets part of it wrong. This results in Sam and Dean trying to kill Maggie and Don and failing miserably. Since the Starks are beginning to throw a spell at the Winchesters, Sam decides to save his life and Dean’s by spontaneously offering counseling to save the Stark marriage. Dean gets on the advice bandwagon as well. The brothers point out that since Don and Maggie haven’t killed each other by now, they probably actually share a bond of true love. Maggie and Don agree and, as they make up, Dean and Sam get away. Alas, Dean and Sam are tracked to their hotel room by a Leviathan (Sean Owen Roberts), who prepares to kill them – and is then zapped by Don. The warlock has turned up to take away a pair of lethal talismans Maggie put in the room – after all, the brothers did try to kill her – before they can affect Sam and Dean. Don suggests the Winchesters throw their attacker into a bottomless pit before he wakes up.

The material is seldom laugh out loud funny, but as many SUPERNATURAL fans are also BUFFY and/or ANGEL fans, there’s a lot of pleasure to be had in seeing Carpenter reprise a Cordelia-esque character, albeit one with a homicidal streak. Marsters provides good fun, going from stuffy pillar of the community to smitten swain to cheerful trickster with ease.

“Shut Up, Dr. Phil” gets points for letting Sam draw some parallels between the Starks’ need for communication and his own situation with brother Dean, who is being uncommonly uncommunicative these days. We of course know that Dean is still keeping quiet about having killed Sam’s friend Amy (and feeling guilty about the whole thing), but all Sam knows is that Dean is being difficult and drinking too much, even by Dean’s drinking standards. It’s not clear how or if SUPERNATURAL can wring new wrinkles on the sibling dynamic once the Amy killing comes to light (in the name of all the character logic that ever was, please don’t let one of them go stomping off alone in high dudgeon), but at least Dean is given some good dialogue in response to Sam’s needling.

The Leviathans, although so far not very dramatically compelling, are at least fairly threatening villains. It’s odd that it doesn’t seem to occur to either Winchester that their indestructible assailant may belong to that species. It also seems odd to not show Bobby’s end of his phone chats with Dean. As actor Jim Beaver has shown up on several other series this year, perhaps he was simply unavailable for what admittedly would have been a few short bits, but his work as Bobby never fails to liven up an episode and he’s missed here.

“Shut Up, Dr. Phil” isn’t a standout episode, but as monster(ish) episode of the week fare goes, it’s entertaining, so it achieves its primary goal.