Home » First Look and Details on SUPERNATURAL: THE ANIME SERIES 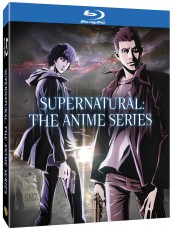 First Look and Details on SUPERNATURAL: THE ANIME SERIES

The popular The CW series SUPERNATURAL is going to get Anime-ted with a brand new 22-episode series due out on Blu-ray on July 26, 2011.

Dubbed SUPERNATURAL: THE ANIME SERIES, it finds  The Winchester Brothers Sam and Dean on slightly alternate adventures that tie into the first two seasons of the popular series.

The suggested retail price will be $54.97 for Blu-ray and  $49.98 for DVD. It will also be available On Demand and for Download.

Read below what the press has to say and check out the DVD box art below.

SUPERNATURAL: THE ANIME SERIES revisits the Winchester brothers’ journey down the backroads of America as they search for clues to their father’s disappearance, hunt down the supernatural in all its unearthly forms, and enter into the unexpected mystery of their destinies. The SUPERNATURAL anime episodes mirror the story arc of the series’ first two seasons, providing supplemental stories ranging from prequels and spin-offs to untold tales that fit within the SUPERNATURAL mythology.

To maintain continuity with the live-action series, the characters of Sam and Dean Winchester in SUPERNATURAL: THE ANIME SERIES reflect the look of the SUPERNATURAL actors – in vibrant, exciting anime and, presented in full 16×9 widescreen format.

Padalecki and Ackles are also ever-present in the Blu-ray™ and DVD enhanced content. The SUPERNATURAL co-stars provide a video introduction to each of the 22 anime episodes, and are also featured in a series of interviews that include conversations with live-action series creator Eric Kripke, and SUPERNATURAL: THE ANIME SERIES directors Shigeyuki Miya and Atsuko Ishizuka.

Special features on the Blu-ray™ and DVD also include a two-part featurette, “The Making of Supernatural: The Anime Series,” an intriguing behind-the-scenes revelation of how the live-action series was actually re-imagined into its new art form.
Madhouse, working with full approval of Kripke, produced the series in full high-definition animation utilizing both American and Japanese creative teams. The Madhouse production team is headed by executive supervisor Masao Maruyama and directors Miya and Ishizuka. Takahiro Yoshimatsu and Kenichi Takefuji are in charge of character and art design. 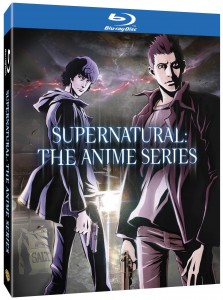