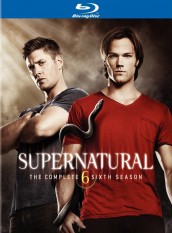 You gotta hand it to Sera Gamble and her writing crew.

They took the ball that Eric Kripke gave to them and carried it across the goal line. When Kripke decided that he was no longer going to be the showrunner for SUPERNATURAL, many fans were worried that the show they loved would go down to the toilet or stop completely.

Gamble and The CW decided that they wanted a sixth season (and now a seventh) of the long-standing show and they had to formulate a plan as to where the show would go from the fifth season. At the end of the fifth season, Sam (Jared Padalecki) had been trapped in hell with Lucifer and the angel Michael after a long battle. Dean (Jensen Ackles) had gone back to a life where he was playing the step-father to a son and a new girl that had won him over.

The end of the fifth season could have been the “Swan Song” that the series needed to end (and was the episode title of the last episode of the fifth season). But it wasn’t as we were given a new lease for SUPERNATURAL (and THE COMPLETE SEASON SIX is now on Blu-ray) – one that took us back to the series roots where the Winchester brothers were fighting monsters and creatures instead of having to deal with all this angel and demon stuff.

Of course, it didn’t last that long. In fact, Season Six had just as much angels and demons as any other season after the initial episodes that focused on this creature hunting aspect. But it was all in the name of the overall mythology. While a number of new creatures were roaming the Earth, it was because “the Mother” was coming back. The thing that gave birth to all the werewolves, vampires and other nasty things that the Winchester brothers have been fighting since day one.

But there was much more to it. Turns out that Crowley (Mark Sheppard) was now the head demon in charge of Hell since Lucifer was trapped with Michael and he had resurrected Sam without a soul (because if he had a soul it would be so tortured that he would go mad after being in the cage with Lucifer and Michael for so long). Crowley as we find out later along the season wasn’t working alone and had forged a deal with Castiel (Misha Collins) because the angel was fighting his own sort of civil war. A war that he was not bent on losing and literally signed a deal with a devil – not the devil but a devil in order to help him win it.

The whole switch with Castiel was interesting turn of events given how close he and the brothers have been over the past two seasons. He was there guiding light in a lot of ways and helper that got them out of trouble on more than a few occasions. Now to have that same person they consider a friend turn into the enemy they have to destroy is a big deal.

That sets up Season Seven. What will happen with the newly empowered Castiel and his do-anything-to-win-the-angel-war mentality that brought all of Season Six together? I assume there is no going back and Castiel will have to be dealt with as any other demon or bad angel they have come across. Still, it will be a more emotional fight than they have ever had.

Of course, this makes for good TV watching and something fans can look forward to.

The Blu-ray special features include a featurette on star Ackles talking about directing on the show, “The Quest For Soul”, commentary on a couple of episodes, some outtakes, an easter egg and two episodes from SUPERNATURAL: THE ANIME SERIES.