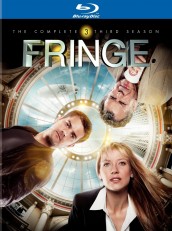 What the hell happened to Peter Bishop (Joshua Jackson) on FRINGE?

Obviously, this is the million dollar question heading into Season Four of the science fiction show on Fox.

Now you can catch up with the Blu-ray release of FRINGE: THE COMPLETE SEASON THREE that delves deep into the mythology of the budding war between the two universes that are set to collide, at the heart of the season was Peter Bishop and his connection to the device that could destroy one of the universes and created by the alternate universe’s Walter (John Noble).

At the end of Season Two Faux-livia (Anna Torv) was put in place of our universe’s Olivia in order to gather information on Peter and the world in which we live. She seduced Peter and much of the first part of the Season Three was spent dealing with what was happening with both Olivias. Of course, this was just building to a greater mythology arc about the collision course both universes were on fighting with shapeshifters and experiments gone wrong and a host of other bad stuff that only hurt a bunch of people.

Soon, the season shifted (not shapeshifted but shifted) to more of the struggle between the two universes and Peter’s place in the whole fabric of things. Would he bring our world to an end? Or save it from the alternate universe? Would he choose Faux-livia and the child that is his? Or would he choose the one he really loves in Olivia.

In the end, Peter choose to bring both sides of the universes together to talk and work things out on a mutual playing field rather than destroy or unite anything. But it cost him. Peter faded from existence. Both Olivia’s, both Walters and everyone else seemed to have no inclination at all that he ever existed.

Obviously, this has something to do with the numerous Observers that have been floating about and putting certain things in motion (and we still have no clue to their reasons or end-game) and I assume we will learn more about this aspect in Season Four, but for now all we have is speculation and the knowledge that we will indeed get more alternate universe and regular universe episodes together and it should be interesting to see just where the show goes from here now that supposedly this whole universes fight is seemingly over. Should be a hell of a ride.

The Blu-ray looks fantastic and it also contains a wealth of special features including “Visualizing an Alternate World” and “The Other You” exploring the show’s dual characters. There is also a function that allows you to experience Episode 316 with an enchanced Pop-up experience, a gag reel and commentary on a couple of episodes.