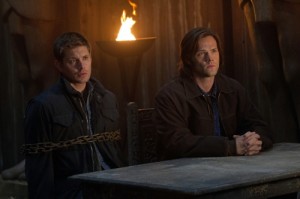 One of the pleasures of SUPERNATURAL is the show’s flippant entities, as opposed to the I’m-gonna-get-you variety. True, the cheerful off-hand types aren’t always on hand, but when they are – think Mark Sheppard’s Crowley, Richard Speight’s Trickster/Loki/Gabriel and Sebastian Roche’s Balthazar, to name a few – they’re a hoot. We can add to the list Faran Tahir’s Osiris, Egyptian god of judgment, who turns up in “Defending Your Life” to weigh Dean’s (Jensen Ackles) sense of guilt. Uh-oh.

In “Defending Your Life” (for those who missed it, this is also the title of an Albert Brooks film about the afterlife), Sam (Jared Padalecki) and Dean head to Dearborn, Michigan, where some weird deaths have occurred, like a guy getting run over by a car on the tenth floor of a building. A little research shows that the victims share a sense of guilt for past sins, and the manner of their death is tied to what they feel especially guilty about. Other common factors are a local bar frequented by the victims, and a big red barn on a farm. The god Osiris holds court there, literally. If he finds that the guilt within a soul is heavier than the weight of a feather, the sentence is death.

Last week, Sam and Dean discussed the matter of Sam’s friend Amy (Jewel Staite), a creature who saved Sam’s life when both were children. Amy had recently been on a minor killing spree to save her little boy, but Sam was convinced she was done with being a danger to humans. Dean gave lip service to agreement, but then secretly killed Amy afterward. Now he’s feeling guilty about both the killing and lying to Sam, not to mention all the other stuff Dean already feels guilt over. Sam and Dean encounter an unfortunate man, haunted by a double murder he committed thirty years ago, who has just been released from prison but sentenced to death by Osiris. Sam puts the guy in a salt circle, but when the man is alone and confronted by his ghosts, he makes a break for it and is shot dead. 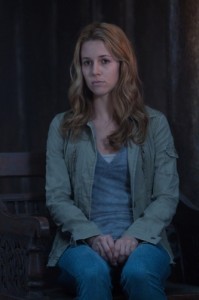 Dean makes the mistake of getting drunk at the bar, and before he knows it, he’s on trial before Osiris. Sam shows up and insists on defending his brother – after all, Sam was a pre-law college student before he got dragged into the family business. Osiris thinks this is hilarious and lets Sam proceed. Osiris calls as a witness the ghost of Jo (Alona Tal), who died in an explosion after being mauled by hellhounds. Jo doesn’t blame Dean for what happened, but Dean clearly blames himself. Then Osiris plays on Dean’s guilt about rousting Sam from his college existence and setting him on the monster-hunting course. Again, Sam doesn’t blame Dean, but Dean agrees that he was motivated by not wanting to be on the road alone. Osiris plans to call a third witness, but Dean is sure it is going to be Amy. Rather than have his lie exposed to Sam, Dean submits to Osiris’ death sentence.

Sam refuses to give up. Bobby comes up with the information that Osiris can be derailed for a century or two after being stabbed by a ram’s horn. Sam goes off to find the object and has Dean sit within a salt circle (a proven defense against the supernatural). Dean is visited by Jo’s shade. She doesn’t want to harm him, but she is being compelled. Sam gets a ram’s horn, also known as a shofer used in Jewish religious ceremonies (really), and startles the heck out of a rabbi who catches Sam in the act. Sam stabs Osiris just in time and Jo vanishes without blowing up the hotel room. Later, Sam asks Dean who the third witness would have been and Dean says it could have been anybody. Dean then asks Sam why Sam wasn’t put on trial. Sam says that, while he has felt guilty about many things, he feels he’s paid his dues and these days actually feels kind of good.

Well, high time somebody on SUPERNATURAL took time to stop, smell the roses and think, “Much better than a cage in Hell.” This of course assumes that’s what’s really going on with Sam and that he’s not possessed/soulless or in some other not-really-Sam altered state, but since the show could use a little lightening up at this point, we can hope that Sam is actually experiencing a non-depressive episode.

As mentioned above, Tahir is a lot of fun as Osiris, not overdoing the sense of mischief, but playing the character in a way that suggests he’s got a full existence beyond the bit that we see. Since Osiris’ demise is stated as temporary, perhaps we’ll see more of him.

“Defending Your Life” also engages in some nice philosophical speculation about the nature of guilt, punishment, forgiveness and if it’s possible to pay for one’s worst sins within a lifetime. We of course don’t want Dean to die (he’s done that enough already anyway), but the conundrums are clearer in the cases of the guest characters. The issue of who gets to judge, and why, is also raised. SUPERNATURAL doesn’t go for hard and fast answers, and it also allows for complexity within the characters. This week, it’s Sam who determines to engage in mortal combat, while Dean is ready to accept Osiris’ authority. Then again, an episode that centers on Dean feeling guilty is just a little like an episode that centers on the sun rising in the east. It’s a credit to all concerned that there’s much more to “Defending Your Life” than just this aspect.