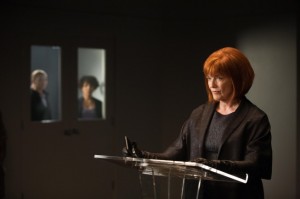 Here’s the problem with a show like FRINGE that continues to break the rules in order to try something different – some genre fans are so savvy they can see the “truth” before the big twists actually arrive which spoils part of the fun to begin with.

With “Subject 9”, it’s one of those episodes where genre fans will see the ending coming a mile away – but casual fans may not.

In the episode Olivia (Anna Torv) starts to experience some strange paranormal experiences that resemble a blue light that has a significant metallic charge. She has confided in Walter (John Noble) that as much as he’s been seeing a man in reflections in his office, she’s been having dreams of a similar man too.

Of course, we know it’s Peter (Joshua Jackson) who saved the universe at the end of last season – by sacrificing himself and his existence.

However, there is a residue left in the universe, and Peter seems to be pushing his way through even though it’s the job of the Observers to make sure this doesn’t happen.

“Subject 9” goes through a lot of machinations to get to the end point where – SPOILER ALERT if you haven’t already figured it out – the blue light is actually Peter trying to connect with Olivia (not hurt her).

By episode’s end, Peter emerges from the same lake he was supposedly drowned in when he was a boy (in this new timeline). And the problem – nobody remembers him or knows who he is.

While the episode is solid, it also proves to not be as suspenseful and surprising as it probably should have been. We’re four episodes into the new season, and at some point we knew Peter was going to have to emerge. While it’s nice to have that delayed four-episode build-up, I wish there was a better way about getting to this pay-off. Yes, after so many years of watching genre TV, some twists and turns are a lot easier to see.

“Subject 9” also brings back a patient from Walter’s past – yet another thing that he has to feel guilty about.

Now that Peter has returned, it’s opened up a whole can of worms – not only from the Observer’s perspective of trying to stop this paradox from worming its way even further into the current timeline, but also what it means for the missing memories of all the characters about who and what Peter means to them.

This will make for great drama the remainder of the season and I’m glad this big plot reveal is over and done with – now we can get to the good stuff.