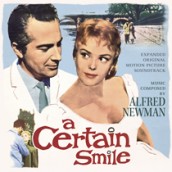 Few classic composers were better at playing the glory of love against exotically glamorous settings than Alfred Newman. And the 1950’s were a heyday for his lushly picaresque affairs, whether it was William Holden falling for Jennifer Jones against the backdrop of Hong Kong in LOVE IS A MANY-SPLENDORED THING, or Yul Brynner letting his lips find out if Ingrid Berman was really the Russian empress ANASTASIA as they gallivanted amongst France’s hoi polloi. That country’s Riviera proves a glamorous backdrop for the amour fou of 1958’s A CERTAIN SMILE. And though Christine Carere and Rossano Brazzi might not have had the star recognition to make this film as well known, Alfred Newman’s score for it proves every much the equal of any score that sealed a famed movie couple with a sweet orchestral kiss.

Alfred Newman was used to dealing with purer romances than a Sorbonne student who ends up having an affair with her husband-to-be’s uncle. Yet there’s nothing but the innocent rapture of true love on hand for this wonderfully thematic score, one that always seems ready to burst into outright song. It’s a quality that’s more than apropos for a composer who got his start on the Great White Way, only to oversee such Broadway-to-film musicals as SOUTH PACIFIC and CAROUSEL But if any legendary songwriters possess this SMILE, then they’re Newman’s good friends Ira and George Gershwin, whose symphonically swooning quality echoes through this score’s gorgeous main theme (written by SPLENDORED’s Sammy Fain), particularly with its echoes of “Our Love is Here to Stay.” While there’s certainly a bit of drama and heartbreak along the Cote d’Azur, it’s this overall feeling of first, smitten love that makes A CERTAIN SMILE one of Alfred Newman’s most listenable gems.

If there was a singer whose velvety, romantic voice was the equivalent of Newman’s instrumentals, then it was Johnny Mathis, who’s righteously on hand in A CERTAIN SMILE to sing the title tune. The number also opens the original Columbia soundtrack album, which is the second CD of this exceptional La La Land album. SMILE marks the label’s first, welcome strut into the neo-golden age arena, complete with excellent graphic design by Jim Titus and enraptured liner notes by nostalgia specialist Julie Kirgo. The sound on both Newman’s original tracks and the LP presentation is gorgeous, exactly the kind of lyrical, lilting music that casts an irresistible spell under a starry French night.

Click on link: To buy the A CERTAIN SMILE soundtrack