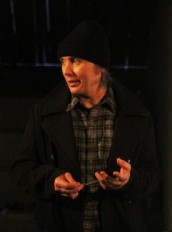 Usually, when people get emotional on WILFRED, it’s because they’ve made bad choices to land in a corner. However, in “Truth,” both Ryan (Elijah Wood) and his girlfriend Amanda (Allison Mack) wind up miserable, and the situation is played for drama rather than laughs.

In bed, Ryan confesses to Amanda that he loves her, while Wilfred shows up in the kitchen dressed like a crazed survivalist and railing about a coming apocalypse. Ryan thinks this may be because he told Amanda how he feels, but later at work, Amanda says she loves Ryan, too.

Ryan suggests that Amanda move in, which Wilfred thinks is a horrible idea. Then an earthquake traps Ryan under a bookcase. Ryan is rescued by Wilfred’s old acquaintance Bruce (Dwight Yoakam), who sees Wilfred as a person. Bruce has a suitcase that he and Wilfred claim contains “the truth” about Amanda, which will prove why she shouldn’t move in with Ryan. However, in order to see what’s in the suitcase, Ryan must prevail in a series of irrational contests against Bruce.

Finally, however, Ryan wins. Inside the suitcase is a timer – showing that Ryan has spent over twelve hours in the basement talking to a dog and playing pointless games. The truth is that Ryan probably isn’t mentally stable enough for a relationship – certainly he’s not if he can’t bring himself to tell Amanda about how he sees Wilfred.

Ryan Amanda he doesn’t love her any more. Amanda is genuinely heartbroken, and Wilfred knows that Ryan lied to Amanda to protect her because he loves her. But even this situation is not the approaching cataclysm that Wilfred still senses.

Mack is so personable and sharp yet vulnerable that seeing Amanda crumble in the face of what is to her inexplicable rejection is truly sad, without any of WILFRED’s customary irony. When Amanda curls into a sobbing ball and Wilfred puts an arm around her, we understand that we’re looking at a dog instinctively moving closer to a human in distress, not Wilfred playing games.

Likewise, when Wilfred talks to Ryan afterwards, Wilfred is uncharacteristically sympathetic – there’s nothing ambiguous, treacherous or facetious. It’s a quiet, honest moment between two friends that adds a little bit of welcome weight to the usual insanity.

Speaking of the usual insanity, Yoakam is so much on WILFRED’s customary wavelength that it’s a wonder he doesn’t turn up more often. Deftly absurd, emphatic, wily and a little menacing, his Bruce is perfect for this universe.

There have been hints all season that Ryan’s mysterious father will try to co-opt him back into the family law firm. This in itself doesn’t seem like it should be so catastrophic, but of course WILFRED has a way of perpetually surprising us. Meanwhile, “Truth” is an episode that demonstrates more genuine emotion than usual, though it has less humor than WILFRED customarily provides.