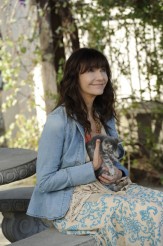 An oddly flat episode that is not funny, outrageous or touching

Most WILFRED episodes are respectably, often outstandingly weird even, at those times they fail to be funny. “Service” is rarely funny, which is all right – but it’s not intriguingly peculiar, either, or even touching, apart from one moment at the end that requires knowledge of a Season One episode. For WILFRED, “Service” is strangely mundane.

When the company fails to come up with a new cancer drug in time, Ryan’s (Elijah Wood) boss (Steven Weber) gives a big rally-the-troops speech – and then commits suicide by shooting himself in the head. Wilfred eats some of his brains.

Ryan goes into a jobless funk that causes him to forget/ignore his sister Kristen (Dorian Brown), who was counting on him to be there in the latter days of her pregnancy. Ryan latches on to the idea that maybe their mother (Mary Steenburgen) can be there for Kristen, even though Mom is at a psychiatric facility and her doctor (John Michael Higgins) thinks she should move in permanently.

After Mom’s beloved cat Mittens dies – Wilfred digs up and eats part of the corpse – Mom proposes a road trip with Ryan. Ryan discovers mid-trip that Mom doesn’t have her meds on her, which results in Mom hallucinating that Ryan is her husband Henry. Finally, Mom steals the car and Ryan is forced to call Kristen, who arrives, helps find Mom and promptly goes into labor. Ryan is forced to deliver his sister’s baby. Wilfred eats part of the afterbirth.

Back on her meds, Mom decides she’s best off at the residential psych hospital after all.

The one actually affecting moment in “Service” is where we see the painting of Mittens that Mom is working on – it’s Rhea Perlman, who played Mittens back in Season One, when we discovered that seeing animals as people seems to run in Ryan’s family.

Otherwise, “Service” is oddly flat. Ryan’s boss’ inspiring story isn’t detailed enough to be inspiring or preposterous enough to be funny. The suicide registers as mildly tragic (the character’s capacity for jerkhood is well-enacted by Weber, so we didn’t like the guy, but we understand his despair) and Ryan’s jobless funk is standard Ryan depression. Kristen’s inability to see beyond her own needs is typical of that character – but it also makes sense for someone who is about to give birth.

Steenburgen plays a woman whose free spirit borders perfectly on unbalanced with finesse; she’s an ideal casting choice for Ryan and Kristen’s mom. However, we don’t feel like laughing at her and we’re not given an opportunity to laugh with her, so the result is that we simply don’t laugh on the road trip. Then there’s Wilfred’s inappropriate eating – par for the course with Wilfred, so it’s not shocking, no harm is being done, and it’s not really amusing.

Finally, after Wilfred’s tizzy a few episodes back about Kristen’s pregnancy, he doesn’t seem to have any reaction positive or negative to the actual baby. This isn’t exactly disappointing, but after the build-up, it’s a non-event.