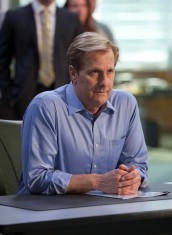 Created by Aaron Sorkin, THE NEWSROOM is set at a fictional cable news network, but the stories it deals with – theLouisiana oil spill, the killing of Osama bin Laden – are real. Jeff Daniels stars as news anchor Will McAvoy, who goes from bland to searingly opinionated in the opening episode, with Emily Mortimer as Mackenzie MacHale, his former lover and current producer, and Sam Waterston as their boss. The series airs Sundays at 10 PM, with the season finale airing August 26; the show has already been picked up for a second year.

Alan Poul, one of NEWSROOM’s executive producers, along with Scott Ruden and creator Sorkin, also serves as a director on the show. He gives his perspective on the show’s comedic/dramatic take on how the media gives us its take on what’s happening in the world.

AX: What inspired you to want to be part of THE NEWSROOM?

ALAN POUL: The inspiration for making the show was very pleasurable. I’ve been fortunate enough in my career to work on a lot of good things, TALES OF THE CITY and SIX FEET UNDER and SWINGTOWN, but to get material this good and to get material this dense, it’s rare. So you feel like you’ve been given a gift. On top of that, to get a cast like this, where these people are all at the top of their game, they’re unbelievably well-trained theatre actors, and they’re unbelievably nice. An ensemble show where you have eight leads, it’s kind of a given that Season One, someone’s going to turn out to be a problem – and we didn’t have it, we absolutely didn’t have it. And so making the show was unbelievably pleasurable. I love directing on it, I love producing it. I think we knew that there were elements of the show that might spark a conversation, maybe be slightly provocative, but we were happy with it.

POUL: No. I can only speak for myself – [I was] totally blindsided, not by the fact that things were being provocative, but by the level of vitriol. “What did we say?” Suddenly this torrent was unleashed and I think there was a moment of shellshock. Then there was a huge ricochet of people coming back and saying they loved the show, and then we were like, “Okay, that’s the conversation that’s out there, we can deal with it,” because eventually conversation dies down, what’s left is the programs. I stand behind the programs.

The worst thing to do would be to react to it [by changing the scripts].. But I’ll tell you something – this is why it’s very smart that Aaron make the point that everything was in the can, because there are developments that happen in the last few episodes where Mackenzie does take a stronger stand about things and does throw down for integrity and there are things that happen where Will looks like he’s back-pedaling a little bit as she becomes the stronger person, and the last thing you want is for people to look at that and say, ‘Oh, they read my blog and they listened to me.’ Everything was shot before we started [airing episodes].

AX: Is all of the news footage that you show actual news footage, or do you ever have to manufacture footage to match the story in the episode?

POUL: It’s an incredibly complex process. We have an unbelievable team on board. The first thing we’ll find out from Aaron is, what are the days on which this story takes place, what days of the year and what stories we’re going to focus on. We have an overall deal with CNN where we get from them their footage as they broadcast on the day, as well as B roll [additional footage, sometimes behind the scenes, that was shot but not broadcast]. So out of that, we’re able to construct all the news feeds we need, because at any time, when you’re in that big newsroom set, there are anywhere from five to seven distinct streams of news coming [on the on-set monitors], and most of those we have to assemble, so we have a great team of video producers and video editors, and they take the B roll, they add the graphics to make it look like real broadcast, and then when there is a specific clip, like the clip of Bill O’Reilly interviewing Sarah Palin that was in Episode Two, where we’re going to use it in order to make a comment about how a particular piece of news was covered, then the Fair Use Doctrine comes into play. But it has to be a clip that we are featuring for those specific purposes. Everything else we pretty much manufacture, and sometimes we only have a few days’ notice to do it.

AX: But you’re manufacturing it from footage provided by CNN?

POUL: Mostly from CNN footage and B roll.

AX: How much time is there between you knowing you need the footage, your request to CNN and their ability to get it into your hands?

POUL: Well, it depends on the episode, because obviously as you go through the season, the wheel starts to turn a little bit faster. We try to give our video producing crew a good two weeks to put together all the news feeds that will run through the episode. Sometimes it was as little as three days.

AX: Aaron Sorkin’s dialogue tends to be very extensive, and on THE WEST WING, director Thomas Schlamme came up with doing those walk-and-talk shots as people would go through the corridors together. How do you handle similar amounts of dialogue on THE NEWSROOM?

POUL: Obviously, Tommy very much created that style and stayed with it and did an unbelievably brilliant job. This show is a little different. If you’ll notice, people are not walking as much, and it wasn’t just to get away from the signature [shots of WEST WING], it was because that’s not what people in a newsroom do. I don’t know if you saw Aaron’s cameo on 30 ROCK where Liz Lemon [played by Tina Fey] runs into him and has some question and he goes, “Walk with me.” And then they get up and they go through corridor after corridor. So we actually have seven/eight-page scenes with three people standing around a desk, and so it’s got to be performance, camerawork and, above all, the text itself that holds your interest, and we try to just make the work interesting and not have to invent diversionary camera moves or arbitrary blocking just so people don’t feel like it’s static.

AX: Did you feel like you were taking a creative risk with having eight-page scenes with people standing in a room and talking, as opposed to even using the movement of walking through a corridor, or did you feel like the writing was good enough that you weren’t worried?

POUL: Basically, from the very first table read, and we had two major table reads of the pilot well in advance of when we started, when you hear those actors read that material, that worry goes away. Because you could film it just like a play. In fact, we developed for the pilot a certain style of shooting that we’ve really stayed with. We’ve expanded it, but really stayed with through the series, which is, we usually have multiple cameras, we have them on very long, telescopic lenses, and the cameras tend to rove and follow the action, or follow a thought, from character to character, or get something from a character; when you know then that the other character is going to react, go over and get that [reaction]. So that gives it a certain kineticism, but it doesn’t feel forced. And also, by being on very long lenses, we’re able to keep the cameras pretty far away from the actors, and it gives the actors a freedom to feel like they’re on stage. And because we’re zooming in and out a lot, the actor doesn’t know, “Oh, this part is my close-up and this part is a medium shot,” because it all happens in the course of the same take. So it gives them the freedom to just be the role.

AX: Did you all spend a lot of time researching real TV newsrooms?

POUL: Aaron’s spent a lot more time. We did a crash course before the pilot, where Greg Mottola, who directed the pilot, and I and Richard Hoover, who’s our production designer [who] built that big set, we went and we spent two days in New York and we got tours [of] CNN, Fox, MSNBC and Bloomberg, and watched every aspect of it – how it happened, what happened, what different kinds of meetings there were, at what time of day, and everything. The design of the set came out of that, we just stole the best stuff from every place that we saw. The conference room, where they have those meetings, was not there in the pilot. It’s not there, and we realized it as something that was missing, and so when we went to series, we built it for episode two.

AX: What are some of the things you learned while doing the research on cable news?

POUL: When we did these round-table meetings with all these consultants, something that they came back to again and again, which was, journalism is expensive, talking heads are cheap. So that for a cable news network, where you’re always on a limited budget and money controls everything, getting on somebody who says “black” and somebody who says, “white” and letting them duke it out is entertaining television that costs you nothing. Getting in there on the ground in a field office and finding out where the truth lies is labor-intensive and expensive, and therefore harder to do. What’s the most important thing I’ve learned about cable news? That the decisions that have to be made on a moment to moment basis about what’s important and what’s not and what to cover and what not are made for a variety of very complicated reasons.

AX: How many episodes are you directing?

POUL: I directed two out of the first ten.

AX: Do you work with the other directors?

POUL: I’m there on set all the time. Greg did a brilliant job directing the pilot, but I was there, Scott Rudin was there, Aaron was there.

AX: To ask a spoiler question, does the first season end on a cliffhanger?

POUL: I can’t really say yes or no. I can say the season ends in a satisfying way. It’s not coitus interruptus. Pardon my French.