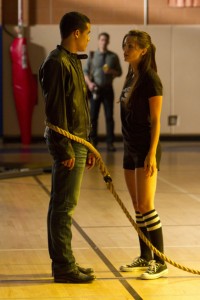 It’s not surprising that GLEE would offer up a second batch of Britney Spears songs for their latest episode “Britney 2.0” and why not? Britney just so happens to be a judge on THE X FACTOR, so milking her songbook is a no brainer and can offer up some nice synergy especially with GLEE following that singing competition series.

The problem though is the Britney songbook is pretty limited. Even Artie (Kevin McHale) makes a reference that they’re scraping the bottle of the song barrel at some point.

And even that, they already did the Britney thing once before, so this “2.0” feels redundant. The way it’s written is also a bit tacky too. It goes through Britney’s real public meltdowns via our Brittany (Heather Morris) and it’s disturbing and not very entertaining at times.

After getting kicked off the Cheerios for her bad grades, Brittany goes on a downward spiral and the gang tries to help her out by doing another Britney week.

In New York, Rachel (Lea Michele) and Kurt (Chris Colfer) have found a nice warehouse on the outskirts of town to move into. Rachel confronts her nemesis and dance instructor Cassandra July (Kate Hudson) and there seems to be a mutual respect by episode’s end. Meanwhile Brody (Dean Geyer) has a huge hard-on for Rachel and lets her know that – even though she’s still hung up on Finn (Cory Monteith) who is off in the Army and not communicating with her.

Marley (Melissa Benoist) has a thing for rebel Jake Puckerman (Jacob Artist) and their budding relationship is actually one of the best things about this episode. Thank goodness for fresh blood and some nice writing there.

I have to address the big elephant in the room though. Unique (Alex Newell) is an interesting character (a cross-dressing student who feels more at home as a woman than a man), but do they really need to make him come off  like a Mercedes (Amber Riley) fill-in. I think GLEE excels when it shows people from different walks of life, but it fails when it tries to rehash the past (such as the Britney songbook among other things). The Puck brother thing could have been an epic fail if it weren’t for Jacob Artist bringing his own voice to the mix.

In Newell’s case, he’s a fantastic and charismatic performer and was so good last year, yet here, he’s marginalized and way too familiar. I hope they find a way to make Unique more unique, because he deserves it.

Songwise, the episode isn’t stellar, though, Benoist singing “Everytime” is fantastic and quite emotional and her duet with Artist “Crazy”/”(You Drive Me) Crazy” which is a Britney and Aerosmith mash-up is quite good to. I also liked the arrangement Michele sings on “Oops! … I Did It Again” as she tries to prove she can be sexy.

Beyond that, “Britney 2.0” just doesn’t work. It’s stale and feels way too familiar. The show needs to find a way to really move beyond the stories we’ve seen, the songs we’ve heard (or songbooks that have already mined) and start to grow. The New York storylines are a step in the right direction, now New Directions needs to get that facelift too.