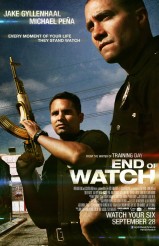 A pretty good LAPD drama, with the unnecessary innovation of having most of the characters equipped with video devices

END OF WATCH is an entertaining, mostly solid buddy cop drama. Director/writer David Ayer for some reason has elected to show the bulk of it through video cameras – both the police and the criminals have them – which doesn’t seem to serve any purpose. In horror movies, this format can allow for a particular type of tension and storytelling, but here, everything could just as easily (and often more watchably) be accomplished with a conventional filming style.

LAPD officers Brian Taylor (Jake Gyllenhaal) and Mike Zavala (Michael Pena) are partners and best friends who patrol the streets of South Central in the Newton district, nicknamed “Shootin’ Newton” for its high incidence of gun violence. Brian is taking night classes, and he’s making a video about work for one of his courses, which is the justification for all the video footage. At the same time, a small but vicious gang with ties to a Mexican drug cartel is recording its own exploits.

Ayer stretches credibility with this tactic, especially when Brian’s superiors give him warnings regarding the video but take no action on several occasions. However, END OF WATCH is otherwise very engaging. Gyllenhaal and Pena have an easy, appealing chemistry with each other and convince us that Brian and Mike are both well-suited to their calling – they aren’t pretentious about it, they aren’t brutal, but they honestly like the idea of the job of policing.

Ayer also makes it clear that being a police officer does not equate to a sense of nonchalance about gunfire. Brian and Mike don’t expect to get caught in a shootout; there’s no “make my day” bravado here. The men both have healthy lives outside the force, with Mike’s wife Gabby (Natalie Martinez) expecting a baby and Brian getting serious about the brainy, game Janet.

SOUTHLAND fans will find a familiar feeling of offhand grit, surprise, black humor and sudden drama, though END OF WATCH has a little more coincidence (though not an overabundance of it). There is a similar sense of breathing room in both – we can believe these people have day to day lives that encompasses a job that can be, but is not always, extremely dangerous.

America Ferrara is very effective (and virtually unrecognizable in demeanor from her UGLY BETTY days) as precinct-mate Officer Orozco, with Cody Horn likewise impressive as her partner Officer Davis. The rest of the cast is filled out by worthy performers suited to their roles.

END OF WATCH does have one extended run-and-gun battle, but is mostly thoughtful and quietly observant. It makes us feel at home while we spend time getting to know its people, which in a feature film about on-the-job police feels downright refreshing.