Home » house at the end of the street review 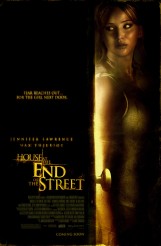 Movie Review: HOUSE AT THE END OF THE STREET

An uneven horror movie with some guessable plot twists – but oddly, no street

As this is the opening sequence, it is probably not too spoilery to say that HOUSE AT THE END OF THE STREET begins with a married couple being murdered by their seriously disturbed teenager. A few visual flourishes later, four years have passed and we’re into the movie proper. Seventeen-year-old Elissa (Jennifer Lawrence) and her divorced doctor mom Sarah (Elisabeth Shue) have moved from Chicago to this leafy upscale suburb to try to start anew in a large rental house, adjacent to the site of the murders.

Observant viewers will immediately be alarmed by the implications – not because our main characters are in such close proximity to the home where violent, psychotic crimes were committed, but because neither building can be said to be on a street proper. We’re never quite sure where one place is relative to another, geographically speaking, except that one can be seen at a distance from the other. Normally in the course of a horror film, having isolated premises is a good idea, but when a movie’s title is something as basic as HOUSE AT THE END OF THE STREET and the filmmakers choose not to deliver on half of that, or think to change the title, questions arise early about what else they’ll think we might not notice.

It’s hard to talk about specifics without giving away the plot twists, except to say that many audience members will probably catch on sooner than intended, and far sooner than does Elissa. There’s actually a good idea in the screenplay by David Loucka, from a story by Jonathan Mostow – even if it’s not difficult to detect the filmic inspirations here – but the execution is dodgy. Director Mark Tonderai and writer Loucka can’t seem to make up their minds if they really want to get into the mother/daughter dynamics between Elissa and Sarah, and Elissa’s mixed adventures in the local social scene, or if they’re just marking time with these before they can get into the thriller aspects.

Tonderai accomplishes some good jump scares, but the filmmakers also have a lot of fairly generic genre action. It doesn’t help that the third act includes some nigh-insurmountable expository dialogue.

Lawrence is natural and sympathetic, and Shue brings a lot of personality to Sarah, who worries about her own incipient alcoholism, parenting skills and demanding work schedule. Max Theriot is suitably sensitive as the neighbor boy with a tragic past and Gil Bellows is grounded as a police officer who befriends Sarah.

HOUSE AT THE END OF THE STREET has some smart notions and the occasional fun speech, but it’s not psychologically acute enough to make us take that aspect seriously and it’s not nearly suspenseful enough to be scary. What’s left is the type of PG-13 thriller that hopes for an undemanding teen audience – in this case, one that won’t even wonder about that unmapped titular street.