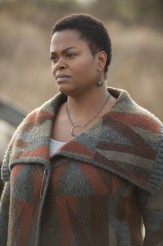 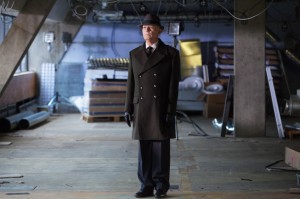 I’ve wanted to like the final season of FRINGE. I think the idea of a future ruled by Observers and the Fringe team trying to take them down was always a a solid arc for the final stretch.

Yet, the fifth season of FRINGE has been painfully slow and redundant. The idea that Walter (John Noble) has to find all these missing videotapes in order to remember what September told him about stopping the Observers has really padded things.

I thought this videotape thing would have been dispatched with much quicker, considering this is a 13-episode arc, but the writers have held on to the concept way too hard. In many ways, the “Fringe Case of the Week” has been replaced by “finding the tape of the week.” It doesn’t leave much for dramatic variety, but we did get a fifth and final season, so there’s no use in complaining.

In the past few weeks, Peter (Joshua Jackson) has taken the unorthodox step by inserting Observer technology into his head so he can think, see and become like the Observers. His solitary goal has been to avenge the death of his daughter Etta and kill baddie and head Observer Windmark (Michael Kopsa) he directly killed her. In order to do that, he needs an advantage.

As Olivia (Anna Torv) and Walter discover, the tech in Peter’s head is making him mentally advanced but is slowly stripping him of his humanity. What Olivia is able to explain to him, is that in order to win over the Observers, they need to not lose their humanity. To win, they need to keep Etta’s memory alive in their hearts.

With that, Peter extracts the technology from his head, hopefully avoiding permanent neurological damage from this little experiment.

Olivia goes on her own little journey to discovery throughout this episode. She picks up a huge magnet waiting for her by a woman (Jill Scott) who has psychic abilities. When Olivia is abducted while bringing the magnet back (remember there’s a ransom on her), she uses the bullet Etta used to carry with her to get out of the situation alive. This is why she believes Etta will always be with them.

“The Human Kind” is an episode that gets FRINGE back on the right track. I was not a fan of them killing off Etta so early in the season and it did damage the series a bit since the show needs its supporting cast to add color and Etta was a welcome addition.

Then again, you need conflict, and revenge is a good motivator as any. With only a handful of episodes left before the series’ conclusion, FRINGE needs to get back on track pretty quickly to resolve all the things that have been set up this season and hopefully find a satisfying conclusion to the series as a whole.

Love it or hate it, Season 5 has been a challenging affair, but it’s still way more captivating and interesting than most shows on television. The fact that the show is aware that it’s ending, also allows for bigger chances to be taken too without fear of cancellation. Still, I hope the show gets moving quickly and starts to take giant steps forward to a great conclusion. It would be a shame if this season’s muddled storyline got the best of the show and torpedoed what could have been a kick-ass finale.