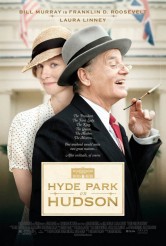 Like two different movies, one of them very good, the other not so much

HYDE PARK ON HUDSON is the name of a real place, the country home in upstate New York where President Franklin Delano Roosevelt lived with his mother when he wasn’t in Washington, D.C. It’s pure coincidence that there’s another famous Hyde in the public consciousness – as in DR. JEKYLL AND MR. HYDE – but this movie has a sense of that second Hyde’s schizophrenia. When HYDE PARK ON HUDSON is good, it shines; when it’s not, it is downright dull.

The film is set mostly in 1939 and told largely from the point of view of our narrator, Daisy Suckley (Laura Linney). Daisy is a distant relative and not so distant neighbor of Franklin (Bill Murray). When Mrs. Roosevelt, FDR’s mother (Elizabeth Wilson), invites Daisy to come and visit,Franklin takes a shine to her. They become lovers, which doesn’t seem to ruffle any feathers at the residence.

In June, British King George (Samuel West) and Queen Elizabeth (Olivia Colman), the first time reigning monarchs of England have come to the U.S. George – or Bertie, as he’s known to his wife and friends – feels that he’s here hat in hand, as England will need American support when war with Germany comes.Elizabeth is more immediately worried that she and Bertie are being mocked by their hosts.

The parts of the film dealing with FDR and George, and George and Elizabeth, are smart, deft and charming. Whether or not this is what really happened, the depiction of FDR taking a fatherly interest in the young king, and Bertie very much in need of fatherly approval (by most accounts, he didn’t get much from his own father, the previous king, who had wanted Bertie’s older brother on the throne) is a nuanced, subtle and credible look at the forming of a friendship between two unique men. Both know the difference between public persona and private reality and both are tentatively probing what those differences are in the other, while simultaneously wondering how much truth is safe to disclose.

The scenes between Bertie and Elizabeth are likewise engaging. What could be seen as infernal snobbishness from the outside is shown to be sheer terror, with Elizabeth scrutinizing each detail of their interactions with the Americans for signs that they either will or won’t help England with the war. At the same time, she’s so concerned with Bertie’s insecurities about whether or not he’s up to being a ruler that she has the ability to make things worse for him. West and Colman convey rapport that makes us believe these are real married people with a real relationship.

Onscreen rapport is remarkably lacking between Linney’s Daisy and Murray’s FDR. Daisy Suckley was a real person, whose diaries (found after her death at the age of 100) revealed a longstanding romantic relationship with FDR and inspired Richard Nelson’s screenplay. Daisy evidently saw herself as drab and fading into the background, but the movie agrees with her to such an extent that, apart from Linney’s personal appeal, we can’t figure out why FDR is drawn to her. He’s already got a smart and obliging confidante in his secretary Missy Elizabeth Marvel) and a warm if odd relationship with his wife Eleanor (the splendid Olivia Williams). We are meant to infer that Daisy has some special quality that blooms when she’s alone with FDR, but it’s not shown to us here. The result is that the scenes that center on Daisy are colorless. We’re not rooting for Daisy to get what she wants with FDR, not because it’s adultery (at least in the film, Eleanor seems quite happy to be allowed to lead her own life) but because Daisy is such a cipher that we can’t warm to her. We can’t tell if we’re meant to see the relationship as an example of phenomenal ego – a powerful man wanting someone in his life who has no visible identity beyond her eagerness to be near him – or if it’s just a failure on writer Nelson and director Roger Michell’s part to produce sparks where we’re meant to see them.

Additionally, since Daisy is our narrator, it’s hard to know what to make of the scenes where she’s not present. Are they part of her story? Is this what’s meant to be happening within the film’s reality, or are we meant to interpret these as Daisy’s imagined versions of interactions she doesn’t witness? This doesn’t feel like artful narrative ambiguity, but rather like plain inconsistency.

Murray’s interpretation of FDR is intriguing – it’s a different side of the actor and a different view of the president than is commonly presented. As Murray plays him, there’s a strain in FDR’s face, but he’s not angry at the world; he’s a little tired from the combined rigors of politics and polio, but he’s still curious and still eager to see what the day holds. He’s urbane, witty and surprisingly gentle, even when he’s being insensitive.

HYDE PARK ON HUDSON is delightful as a character study of historical personages negotiating an outwardly superficial situation that has potentially world-shaping consequences. As a fact-based romance, it simply fizzles out.