Another uneven episode, with a surprising death that lacks little emotional resonance 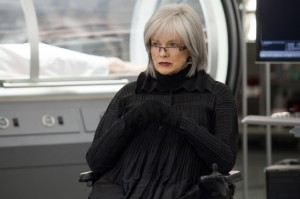 As FRINGE concludes its last episode of 2012 before it heads into the final three episodes of the series in January, the show continues its up and down ride through the season long arc of the humans versus the Observers.

It’s been a challenging season, and at times, a rather boring one too. Without the benefit of too many standalone episodes, the ongoing threat vacillates between ominous to non-existent.

It’s hard to get a grip on the Observers being a threat when they can’t shut down a small group of rebels who used to spearhead the FRINGE division – especially when the Observers have an advantage because they calculate multiple scenarios in their head and teleport. It’s a flaw that is as frustrating as it is ridiculous.

“Anomaly XB-6783746” focuses on the FRINGE team finding another piece of their puzzle – a young anomaly, a child Observer (Rowan Longworth) who holds the key to stopping the Observers for good.

The episode meanders a bit, as Nina (Blair Brown) tries to help Olivia (Anna Torv), Peter (Joshua Jackson), Walter (John Noble) and Astrid (Jasika Nicole) communicate with the young Observer who should not exist (and was scheduled to be destroyed). 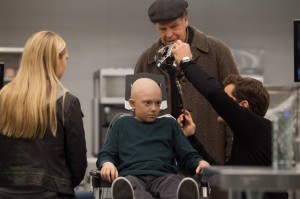 The episode also features Captain Windmark (Michael Kopsa) who realizes Nina is a traitor and begins to interrogate all her employees to find out what she’s up to. Windmark also learns that the Child Observer has been found. Nina doesn’t give anything up, and kills herself before he can extract information from her.

What should have been a huge emotional whopper with Nina’s death, is rendered bittersweet and a little disconnected, particularly with the future storyline and the lack of Nina throughout Season 5. It’s necessary, yet not well played.

Somewhat Dark Walter rears his early head throughout and it’s great to see Noble play this quasi-soulless version of Walter again, though, again, it feels like a near replay of the arc of Peter losing his soul due to Observer tech. With 13-episodes, it’s not a good time to repeat yourself.

I’m still not sure where everything is leading, and I’m excited to see the final three episodes, but moving the story forward into the future and doing a season long arc has in many ways stifled the shows usually top notch credibility and creativity. It’s an incredibly entertaining series, but it finally settled on a direction that sadly didn’t work as well as they probably thought it would when they originally pitched this concept.

FRINGE continues to be one of the most fascinating shows on television, I just wish they would have went into a different direction and not unhinged the show’s final breaths by jumping ahead in time, demystifying the Observers to nothing more than your standard issue bad guys and dealing with a world that doesn’t hold the same warm place that the previous worlds FRINGE has created.

Points for taking chances, points taken away for losing its way hard after a promising first batch of Season 5 episodes.