Home » this is 40 movie review 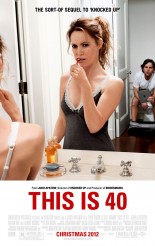 Movie Review: THIS IS 40

It’s hard not to be pulled into the comedic films of Judd Apatow.

As a writer-director of THE 40-YEAR OLD VIRGIN, KNOCKED UP, FUNNY PEOPLE and now THIS IS 40, Judd Apatow has created a vision and a voice all of his own.

His films are so personal, they conjure up the best work of Woody Allen, James L. Brooks, Cameron Crow and Albert Brooks (who also has a major role in THIS IS 40).

Even though he likes to rely on gross-out humor and explicit, almost vulgar comedy, there is also amazing heart beating beneath all of his films, which is why they’ve been so successful.

THIS IS 40 brings back the characters of Pete (Paul Rudd) and Debbie (Leslie Mann) from KNOCKED UP, which are loose proxies for Apatow’s real-life (he’s married to Mann).

Pete and Debbie have typical marriage issues, but they also have high class, rich people problems too. They’re running out of money, Pete’s indie record label is floundering, especially with the failure of the new album by Graham Parker and Leslie thinks her employees at the boutique store she owns are stealing from her.

While THIS IS 40 does have its share of vulgarity and other boundary pushing moments, it’s when it gets down to the human elements that we all deal with that it works the best.

Both Rudd and Mann are fantastic (as are Mann and Apatow’s kids Maude and Iris playing their on-screen kids too). Mann strips herself down to the core to portray the very demanding yet fragile woman, while Rudd puts it all out there as the put-upon husband who can never do anything right.

There are issues with THIS IS 40 including an overlong running time, but the biggest hurdle the film is focusing on the lifestyles and the rich and spoiled. While Pete and Debbie do have relatable problems, when they complain about money issues, but can drop $15,000 to fly out a band to Los Angeles by putting it on their credit card, it does distance themselves from every day audiences that they’re trying to relate to. In a time of an economic downturn, we don’t want a movie to make us sympathize for rich people’s problems.

I’m not saying THIS IS 40 doesn’t work, because it does in many areas. As I said, when it focuses on the simple, universal truths, the movie works like gangbusters. When it flaunts its character’s rich lifestyles and wants the audience to sympathize, all it does is conjure up apathy and scorn.

Other standouts in the film include Brooks as Rudd’s somewhat moochy dad and John Lithgow as Debbie’s absentee father trying to make amends.

Parker is also game as he makes fun of his career and himself – plus we get some great tunes from him as well and his recently reformed band The Rumour.

THIS IS 40 is far from a perfect movie, but like Apatow’s other films, it has enough golden nuggets to make it worth it all. Plus, it’s funny, any way you cut it. It’s not as perfect as THE 40-YEAR OLD VIRGIN, but at least it reminds us what a potent and original voice Apatow is and how he’s showing he’s still one of the best and most adventurous comedy filmmakers out there.